Biopsy bumped up to today

The last couple days have been going absolutely terrible. Every day thus far has been worse than the last. The cells are still dying throughout my body and they won’t start coming back until my white blood cell counts come back up again.

Well, today I was informed from one of my doctor’s that they were going to bump my bone marrow biopsy up to today. It was originally scheduled for tomorrow (Thursday) and was going to be receiving the results from that test on Friday. On one hand, I really want to know the results from this test to find out whether or not I am in remission. But on the other, I never look forward to the pain that these biopsies cause.

The day started out really crappy. My headaches from that spinal tap are still occurring. Every time I stand or sit up, I have an instant migraine which lasts for an hour. That means that every single time I have to go pee or take a shower, I know that at least for the next hour or so I am going to be laying in bed, begging for morphine.

Well the team of doctor’s came into my room at about 12:50pm today and began preparations for the biopsy. However, this biopsy was going to be very different from every single biopsy I have had in the past. Keep in mind, I have been doing these biopsies on and off for the past 4+ years. I bet I have had at least 15 of these done to me. Knowing that I have had so many of these, you would think that I would know by now that I have the option to be sedated throughout the process.

“Sir, would you like to be somewhat sedated through the procedure?” “ARE YOU KIDDING ME?!? YES, PLEASE!!!”

So…on with the drugging! After they put some narcotics in my system, I began to feel a little loopy. I was still very coherent, but everything still kind of felt like a scene out of “Alice in Wonderland.” 10 minutes later, the biopsy was complete and I was actually feeling great. In fact, the way I feel at this very moment is the best I have felt since I got here. I still refuse to move, because I know that the second I do, one of the migraines will instantly spawn. But other than that, things are going well today.

Figured I would attach some pics to the bottom of this to give you a feel for what the procedure looks like. 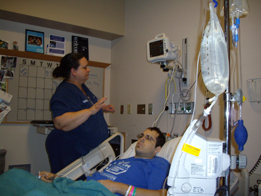