There goes the hair!

Well, today I got the results back from the bone marrow biopsy. That was the biggest event of the day. My mind has been running at a million miles per hour since I had the biopsy yesterday….wondering if I was in remission or not.

4:00 rolled around and sure enough, in comes Dr. Bredeson. He says, “Well, Eric…I don’t have good news, but I don’t have bad news either.” I was under the impression that either

Well, apparently there is a third possibility which I was unaware of and that is the category in which I fall under. He informed me that my marrow looked very empty and that there were hardly any cells in there…which is good. However, there are some very distinct leukemia cells still floating around…a very very small number of them. The doctor and his colleagues felt that there was not enough leukemia in my system to constitute another full chemo regimen. They felt that those few leukemic cells that were still floating around were still in the process of dying…it just takes a little bit more time. So, they are going to have me wait for one week and do another bone marrow biopsy next Wednesday to see if those little bastards are still there. If there are, then they will begin more chemotherapy. If they are DEAD, then I might be able to get out of the hospital for a short bit to prepare for my transplant.

Aside, from the biopsy results, I also had a few visitors tonight. My good friends Jason, Josh, and Dustin stopped in to chat for a bit and catch up on old times. We might start trying to do a poker night one night every week. Nathan, Jason, and Josh are all very interested and it sounds like a lot of fun. I love playing cards so we’ll see what happens with that.

Dawn also came by after work to keep me some company.

As the night wore down, so did the follicles of my hair on my head. With every passing minute, more and more pieces of hair were falling in my face. My entire scalp felt like it was being attacked by Sea Monkeys. My friends and brother were planning on coming tomorrow so we could all take part and cut various things into our heads with a buzzer, but it would seem that mine could not wait. I called my mother, who is staying only a few minutes away. As I was downstairs getting a chest xray, she head over to the hospital to do the deed.

10 minutes later, I was sporting one of the sexiest damn hair cuts I do believe I have ever seen. 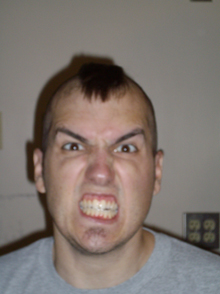