There are things in life that I will never understand. Today, after over four years of remission, my cancer has relapsed and I was diagnosed with leukemia. My worst nightmare, which I have had on and off for the past few years, had finally come true.

Three or four weeks ago, I started noticing an abnormal amount of bleeding from my gums as I brushed my teeth. Keep in mind, I have brushed my teeth the same way for the past 20 years or so. Others that I had brought this up to somewhat shrugged it off saying that I just needed to floss more to make my gums stronger and whatnot. But I knew there was something else going on. Everyday after I brushed my teeth and spat into the sink it looked like that “redrum” scene out of The Shining. But being four years in remission, cancer hadn’t even entered my mind. I just figured my platelets were low due to an infection that I had building in my lungs.

Well, a week or so after that, I noticed some excessive bruising on my arms, legs, and torso. Once again…abnormal. I can’t even remember the last time I had this many bruises. Either way, I still attributed the bruising to the low platelet count and continued living life in the fast lane.

After all, I was just about to finally graduate from college. I graduated on December 16th. I already had multiple job offers all lined up and was trying to make the best choice possible. I wanted to go somewhere where I would feel like my work was valued and that the environment was friendly. I ultimately ended up selecting Harley-Davidson and would be starting working full-time on January 7th of 2008. Things were looking good. I had just graduated from college, had an amazing job all lined up, and was looking at places to move to in the Milwaukee area with a few roommates. We picked out a beautiful place in New Berlin and on December 20th we packed up a U-Haul truck with all of our belongings and headed to our new residence.

As we were packing the truck with various things, my nose had started to bleed. Now normally this would not seem too strange. It was cold out and I have a history or getting nosebleeds when the temperature drops. However, this time was very different. It seemed like no matter what I did, my nose would just not stop bleeding. I had been applying pressure by pinching my nose for 20+ minutes. After releasing my firm grasp, my nose instantly started gushing blood again like a garden hose.

So now I am sitting at three abnormal symptoms with no real explanation to any of them. It was at about this time I started to worry. Anyways we packed up the truck and headed to our new place.

At this time, I had noticed that the bruises I had on my arms and legs were not going away; not even a little bit. My lung congestion was picking up pace and it had turned into a wheezing cough where I would cough up yellow thick mucus. Well, it was Sunday December 23rd and I had decided to go to my parent’s place in Two Rivers, WI to enjoy the holidays. I was feeling a bit under the weather so I stayed indoors for the most part. My father and I watched all of the NFL games that day including the crushing defeat of the Packers by the Bears with a score of 35-7.

I went to bed, now with a humidifier in my room and some Vick’s vapor rub stuff to subdue my lung issue.

Christmas Eve…I woke as I do every other day and took a shower. I was shivering and cold and was not feeling well at all. My parents and I finally made the decision to go get checked out at our local hospital just to be sure everything was fine. As we entered the building, this receptionist asks me what I am there for and I told her that my oncologist had sent in an order to get immediate blood work done along with some chest xrays. Soon there afterwards, a 75 year old woman walks in the door and approaches the desk. Instantly I was no longer this receptionists priority. “Are you here for an emergency mam? …(turns her head towards me) Sir I am going to have to ask you to take a seat while I handle the emergency patients first.” Immediately, I think silently to myself.  “What the heck is this?  She appeared to be in a pretty decent bill of health and here I was in cold sweat looking like I was going to die.”  “Whatever,” I replied.

Well I eventually got my chest xray along with some labs. My local hospital immediately faxed over the results to my oncologist at Froedtert Hospital in Milwaukee. I went home and took a shower to make me feel better. As I am taking my shower, my phone rings…it’s my doctor. “Hi is this Eric? (Yes.) Hi this is Dr. Hari at Froedtert in Milwaukee. I am looking at your lab results and we need you to come to Milwaukee as soon as possible. There are some things in your blood work that indicate that your leukemia has relapsed.”

Holy shit…that moment was probably the second worst moment of my entire life. I about collapsed in the shower as I stood there dripping wet. After I hung up the phone with Dr. Hari I got dressed and walked into my living room where my dad was watching television. In tears, I told him what the doctor told me. We quickly packed all of the necessities and headed to Milwaukee to start the entire process over again.

Merry Christmas! Right? As I sit here writing this journal entry I already have tubes sticking out of me as they plug multiple antibiotics to control the infections that I still have in my system. These antibiotics totally mess with your sense of smell and taste. But this I already knew. I knew the whole regimen which they were about to blast me with. More chemo, more immune system cells transplanted from my older brother, Mike, more wearing masks anywhere and everywhere I go, more gut wrenching pain from the chemotherapy, more puking every morning when I wake up…it was all coming back.

So, just as I graduated from college with my degree, moved into my nice new apartment in Milwaukee, and was just about to start my career at one of the greatest companies in the entire world, I am given probably the shittiest Christmas present Santa has ever brought me.

So here I go, Day 1 has ended and Day 2 (Christmas Day) is tomorrow.

If there is one thing that I hope each and every person that reads this gets out of this entry, it is to live your life while not griping and complaining about the small things in life. Don’t get all pissed off when you hear something you don’t agree with, don’t flip off the guy who cut you off on the highway, and don’t get all pissed off when someone at a bar accidentally spills their drink on you. In summary…don’t sweat the small stuff. I know that quote is so cliché but it is so very true. In the broad spectrum of things, most of the shit people complain or bitch about on a day-to-day basis is totally unnecessary. If something happens that doesn’t go your way, just shrug it off and move on with life.

With that, I would just like to wish every a happy holiday season this year as I will be doing my best to do the same. 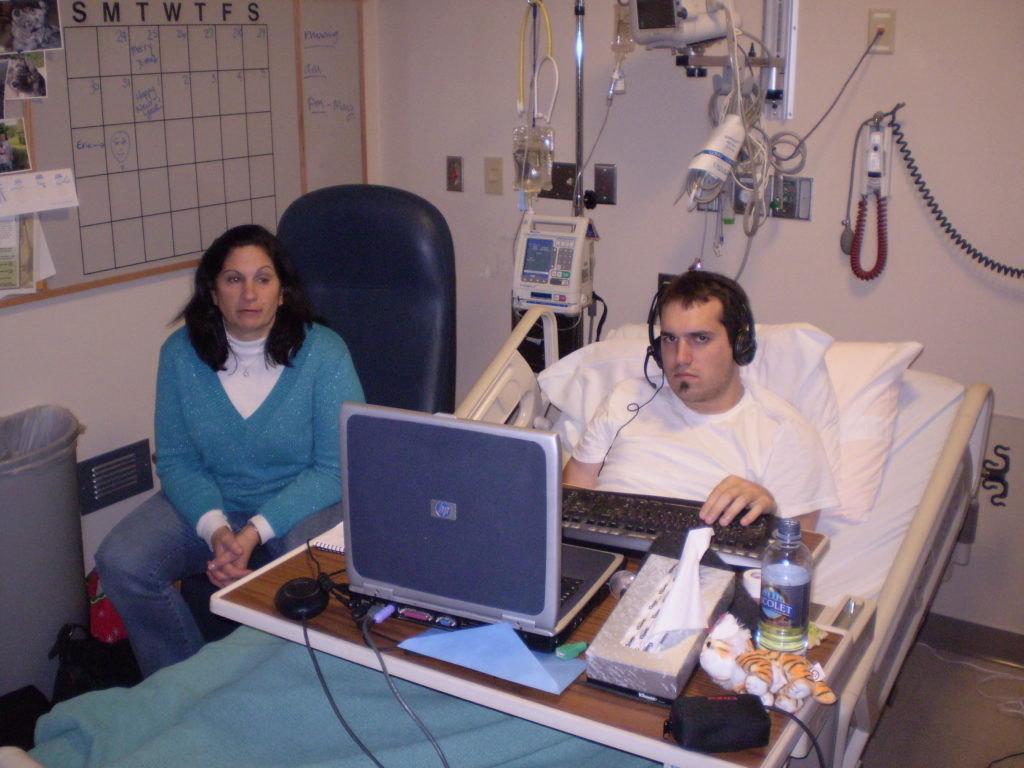