Well last night definitely did not end well. Almost right after I finished posting yesterday’s blog, I became very nauseous, and then ended up vomiting and dryheaving for the next 10 minutes or so. Not exactly the greatest way to end my day or begin my night. The doctors thought that the reason for it was the combination of the chemo and the anti-biotic that I have been on. Oh well.

Either way, I actually slept very well. It was probably the best night of sleep I have gotten yet…imagine that. They brought me a decent breakfast (scrambled eggs w/ cheese, hashbrowns, and some rice krispies). I took a shower and waited for them to bring in my chemo. Not the most exciting of mornings…I suppose unexciting means that it is a good morning.

I’ve been seeing the hospital chaplain every morning for an “Our Father” followed by communion. He talks to me for a bit every day and gives me a lot of positive thoughts and prayers.

I had a few people call throughout the day but for the most part didn’t have any visitors until later on. The first visitor of the day was my best friend from high school, Nathan. He’s been an amazing friend. He stopped over, even though the weather was absolutely atrocious, and played some games with me. We played a little bit of Sheephead (a card game) along with some Xbox 360. It’s pretty typical for me and Nate to get into our “gaming mode” when we get together. He stayed for a couple of hours and then left due to the weather getting worse and worse. Shortly after he left, my mother came. She brought some new stuff for me to use: some clean clothes and some other amenities. Thanks, Mom! 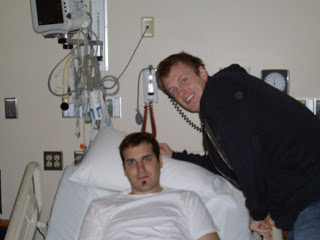 A friend of my older brother Mike, Matt Hoftiezer, was in town and stopped by for a visit. We had a good time and he told me all about his graduate studies at Boston University for dentistry; very interesting stuff. Hes currently enlisted in the Air Force to help pay his tuition and then he will owe the Air Force a few years of dentistry service as an officer when he finishes his studies. Afterwards, we played a bit of Xbox 360 …Call of Duty 4 as one would have it. He shot me up pretty good…its one of those modern day warfare games – quite a bit of fun.

Shortly after, my Uncle Greg, and two cousins, Dave and Matt, came by and visited. It was really nice seeing them and we talked for quite awhile about various things. Sounded like both Dave and Matt are doing very well in college and enjoying it thoroughly. Greg is sporting an awesome new smile…looks great! 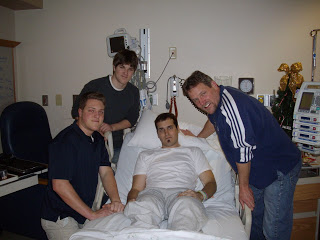 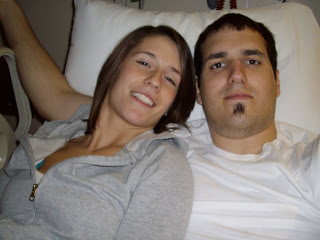 By the time everyone was rolling out, I was starting to crash. Dawn had made plans to make another visit tonight and I just didn’t have the energy to eat any of the homemade pizza that she had mentioned she was going to bring again. A much needed nap was taken.

Dawn showed up with the pizza in hand…along with a piece of cherry cheesecake from The Cheesecake Factory. CHEEERRRRRRRRY CHEEEEEEEEESECAAAAAAAAKE!!!!!!! My absolute favorite! I made that dessert disappear faster than a dress on prom night! …some very much needed calories.

I have already lost 9 pounds in my short stay thus far. I’ve been trying to lose some weight for some time now. I guess this is one way to do it; not exactly what I would recommend though.

Dawn, my mother, and I then watched the first episode of Heroes. My old roommates, Derrik and Tom, picked up the first season for me. I had heard it was a pretty decent show and expressed my interest in it one day as the three of us were walking through Best Buy. They gave me the first season as a gift the other day when they came to visit. Thanks guys! So far it’s a cool show!

Anyways, everyone take care and I have gotten a lot of positive feedback on this blog so I figure I will keep at it. There seems to be quite a bit of interest.