Thank you so much to TMJ4 in Milwaukee for following Eric’s story.  Click the image to the left to watch the clip that was aired tonight by Courtny Gerrish and Stephanie Graham.

PORT WASHINGTON – We’ve been following 27-year-old Eric McLean and his battle against leukemia for a few years now. Now, there’s a heart-breaking setback, but in no way is Eric giving up hope.

Eric and Cari McLean are enjoying wedding cake on their 8-month wedding anniversary.

It’s good to see them laughing after a month that’s been filled with tears.

“About a month ago I noticed some pretty heavy itching in my skin,” Eric recalls.

Eric was getting ready to leave for a business trip, and was having horrible headaches. He went in for an MRI as a precaution.

The leukemia was back for a 6th and 7th time, in two forms: His brain and bone marrow. Cari admits it’s been tough to watch. “It’s been scary. The worst part is knowing he’s suffering and there’s nothing I can do.”

But for Eric, there’s only one choice–fight it!!

“The will to live… I, you know… there’s no point in giving up. I haven’t lived a full life,” Eric explains.

It’s not the first time Eric is defying the odds. In 2009 he was given only months to live, and created a ‘Bucket List’, including sky-diving, throwing out the first pitch at Miller Park, and riding in a hot air balloon. He urges everyone to have a bucket list. “Something you’ve always thought about doing–do it. Someday you’re not gonna be able to.”

Eric had brain surgery about a week ago, and the McLean’s admit is was one of the toughest things they’ve gone through together.

“Watching him get the chemo to the brain was probably the most horrific thing I’ve ever seen,” Cari says.

There was one highlight of the recent hospital stay… a date night, thanks to a good friend. Cari recalls, “She had turned the physical therapy room of Froedtert, this whole gym, into a restaurant.”

Meanwhile, Eric just tries to stay positive. He says, “There’s a light at end of tunnel, the grass is greener on the other side, and I don’t know, don’t know how I’ll get through it.”

The young couple tries to keep the mood light, joking about Eric’s new ‘stache since doctors say his hair probably won’t grow back. 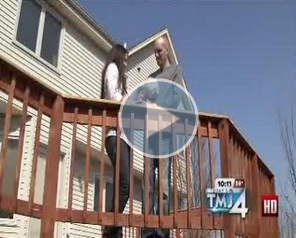