Today Milwaukee Brewers Legend Larry Hisle made the drive up all the way up to Two Rivers to see Eric!  He didn’t come alone though, he brought with him a Prince Fielder game used bat, a jersey, and a baseball signed by Paul Molitor to Eric.  Larry has been to to the hospital to see Eric countless times, and is one of the most kind and caring individuals that there ever was.  Larry spends much of his time as a mentor for youth in the Milwaukee area, and has become a hero to many people.

Larry was truly a special athlete that excelled in every sport he tried.  In high school was given a full scholarship to play basketball for Ohio State University out of high school, but shortly after was offered a professional baseball contract with the Philadelphia Twins.  He was a Topps Rookie All-Star with the Phillies in 1969, and then played 1973 with the Minnesota Twins.  He then had six successful seasons with the Twins including a Gold Glove-caliber year in 1976 and an All-Star appearance in 1977 where he also led the league in RBI’s.  In 1978 Hisle became a Milwaukee Brewer where he was again an All-Star and finished 3rd in the AL MVP vote.  In 1982 he was a member of the Brewers team that made it to the World Series.  Larry then went on to become the hitting coach for the Toronto Blue Jays helping them to World Series titles in 1992 and 1993.

From the Biographical Dictionary of American Sports:

Larry Eugene Hisle – (born May 5, 1947, Portsouth, OH), player and coach, was orphaned and brought up by relatives.  At Portsmouth High School, he excelled in basketball, baseball, and academics.  Hisle, a high school All America basketball player, belonged to the National Honor Society.  Hisle spent one weekend touring the University of Michigan campus with basketball stars Lew Alcindor (Kareem Abdul-Jabbar) and Cazzie Russell but accepted a basketball scholarship at Ohio State University.  Before Hisle attended Ohio State, however, the Philadelphia Phillies selected him in the second round of the June 1965 free agent draft and gave him a $40,000 bonus.  In 1966, he was assigned to Huron, MI where he batted .433, knocked in 13 runs, and belted 3 home runs in 21 games.  The following year found Hisle in Tidewater with a .302 batting average, 23 home runs, and 74 RBIs in 136 games.  He spend the majority of the 1968 season with San Diego, CA, hitting .303 in 69 games.  In September 1968, Hisle batted .364 in 7 games for the Philadelphia Phillies.

Hisle spent the 1969 and 1970 full seasons and part of the 1971 campaign with the Phillies.  His best year in Philadelphia came in 1969, when he hit .286 and stroked 20 home runs.  He finished the 1971 season with Eugene, OR and batted .325 with 91 RBIs and 23 home runs for Albuquerque in 1972.  Following the 1972 season, Hisle changed clubs three times within 40 days.  On October 22, he was traded to the Los Angeles Dodgers for first baseman Tony Hutton.  Four days later, the Dodgers sent him to the St. Louis Cardinals for pitchers Rudy Arroyo and Greg Millikan.  The following month, St. Louis shipped him with pitcher John Cumberland to the Minnesota Twins for pitcher Wayne Granger.  Hisle played five seasons from 1973 to 1977 with the Twins and enjoyed his best performance there in 1977, when he led the AL with 119 RBIs, batted .302, slammed 28 home runs, and played in the All-Star Game at New York’s Yankee Stadium.  Minnesota granted him free agency following the 1977 season.  Hisle signed that November with the Milwaukee Brewers where he played from 1978 until his retirement in 1982.  His best Brewer performance occured in 1978 with a .290 batting average, 115 RBIs, 34 home runs, and an All-Star Game appearance at San Diego, CA.  During 14 major league seasons, Hisle hit .273, with 193 doubles, 166 home runs, and 674 RBIs.

From 1983 to 1984, Hisle served as an outfield instructor in Milwaukee’s minor league system.  In 1989 the Houston Astros appointed him the minor league hitting instructor.  The next years, he held the same title with the Toronto Blue Jays.  Since 1992, Toronto has utilized Hisle as Blue Jay hitting coach and won World Series Championships in 1992 and 1993.  Hisle lives in Mequon, WI withi his wife Shelia. 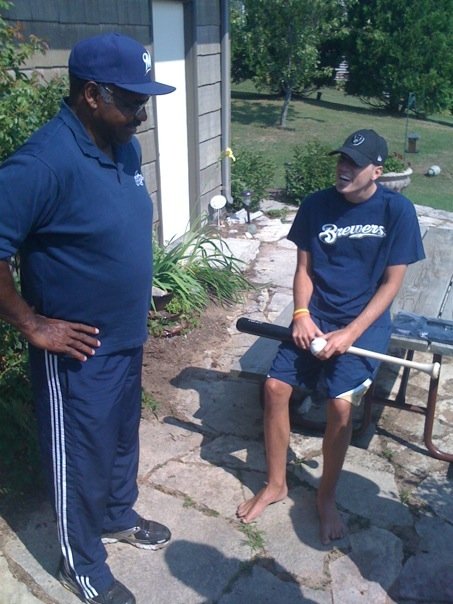