My name is Danny, I live in Texas and I’ve known Mike McLean for almost 10 years now.  I never got the chance to meet Eric, but we chatted several times about his treatments, and the various races I do.  Whenever I race, a small batman figurine is always with me whether in my shoe, my hat, or positioned on my bike handlebars.

On the first weekend in December, I traveled from my home in Austin, TX to Sacramento, CA to participate in the California International Marathon.  I say compete because this would be a new type of marathon experience for me, one where I am running to aid another runner rather than for my own goals.  I was set to run with Matt Oliver, who currently resides in San Diego, CA, was attempting to set a new PR and achieve first in his particular division for the race.  Matt is blind, after losing his sight around age 14.  He can run a blazing fast marathon around 3 hours and 10 minutes, but this time he was aiming to achieve some new goals.  Among them, set a new PR, break 3 hours, and win the USABA division (also the National Championship Event) – no big deal, right?

I have been working and racing with blind athletes since 2013, focusing mainly on triathlons with blind and visually impaired men.  I have worked with women athletes too but only in training camp situations because the competitive rules stipulate the guides must be the same gender as their athletes in competition.  This was my first running only endeavor with Matt, and I was very excited to help him go after these big goals he had set.  We ran the first half of the race in 1:21 which was flying compared to the goal time of 1:25 that was set. Matt was so far ahead of his pace goal, he actually left me in the dust and ran the last few miles alone and unconnected to a guide runner.  At 13.1, another guide picked Matt up and they ran the 2nd half of the race in 1:29, bringing Matt in at 2 hours 50 minutes, good enough to secure 1st place in the B/VI division. 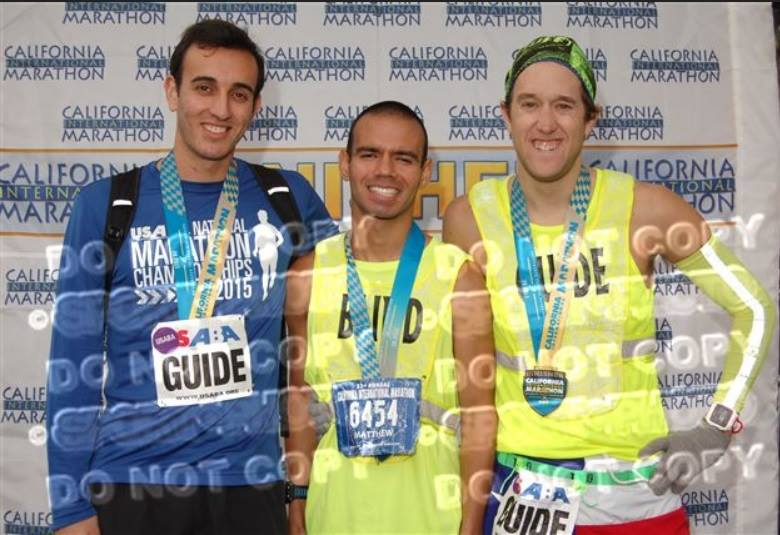 The best part of my weekend, however, was not doing this race or seeing Matt achieve all his goals.  After my portion of the race was finished, I wanted to get to the finish to see the top 4 B/VI runners battle for the win.  Sadly, I arrived about 2 minutes too late to witness personally.  While I was waiting at mile 26 to watch for any familiar faces, I see this gorgeous face running towards me. 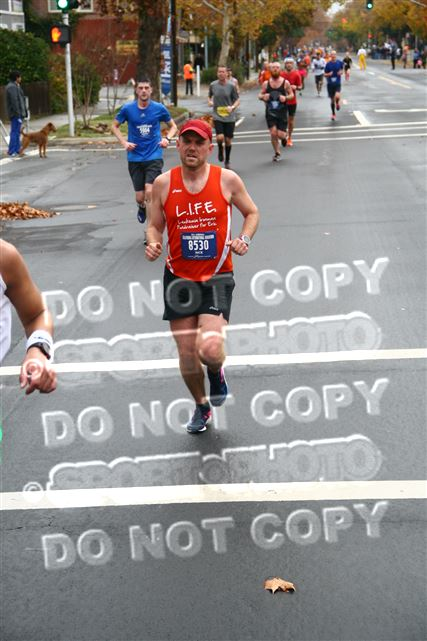 I have never met Nick before, but instantly recognized the jersey as I was wearing the same one the previous day during a short run to shake my legs out after my flights to California. I instantly shouted “LIFE… Go Eric!” Nick turned around unsure really what I was saying but I shouted again “Eric McLean, run for Eric, you’re so close, you’re gonna break 3:00.” And that was it. I didn’t see him again. My immediate thought was to call Mike but my phone was in my hotel, not on me since I was still in race mode. The race ended, I packed up and was gone back to Texas almost as quickly as I arrived. In that whirlwind of travel I forgot to call Mike.

Fast foward to December 13th, when I am chatting with Mike via Facebook about a website that I had learned a friend of his had created a while back. A relatively simple website but has become very dear to many, www.arethepackersundefeated.com. After asking Mike if his friend was still keeping up the website. 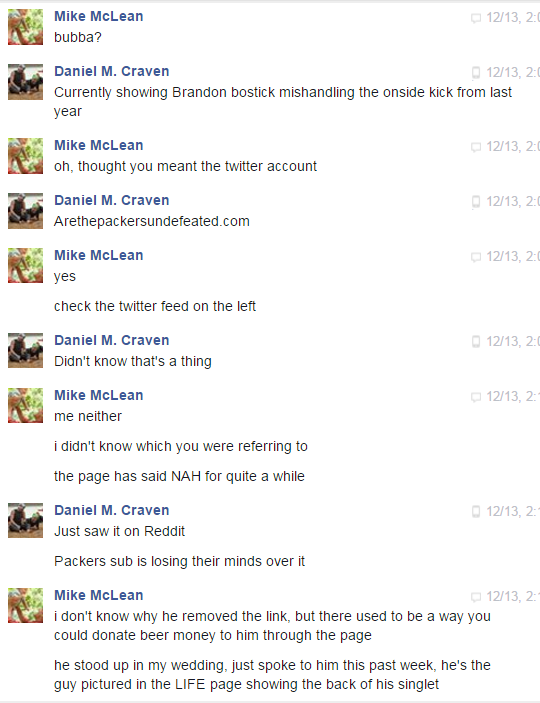 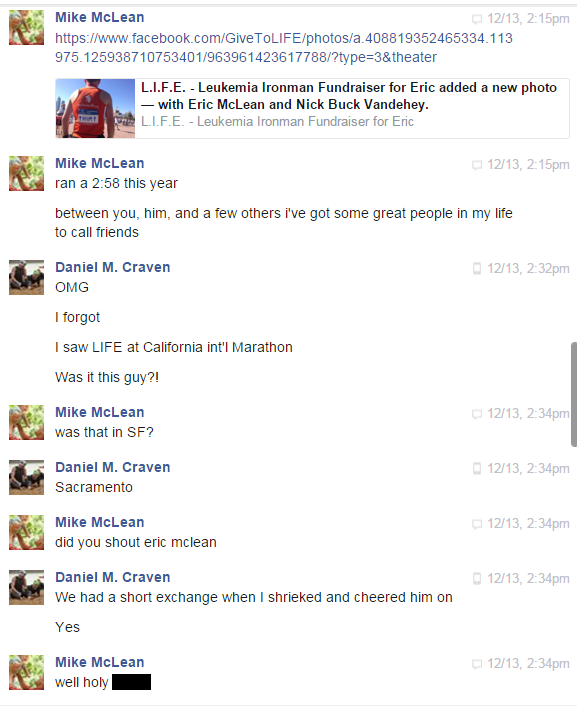 After a quick spit take and string of profanity to highlight my disbelief, we confirmed that Nick was the guy I saw in Sacramento. I was able to connect with him via FaceBook and once that happened here is what I am greeted with on his personal profile. 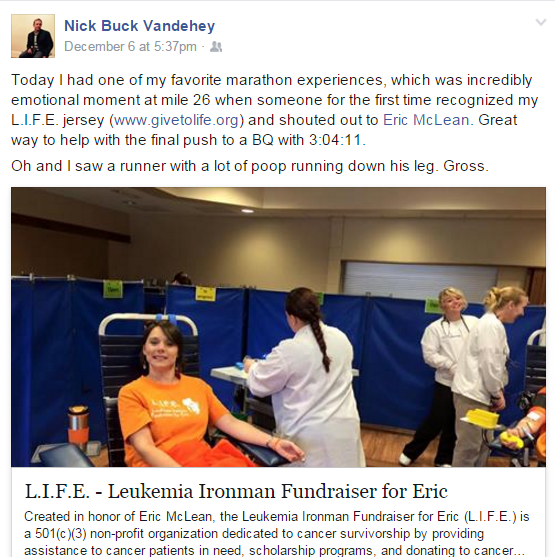 I don’t know all the answers in this life.  I am unsure what happens after we die.  I really believe though that Eric had something to do with this chance meeting at mile 26 to help Nick run his way to greatness. 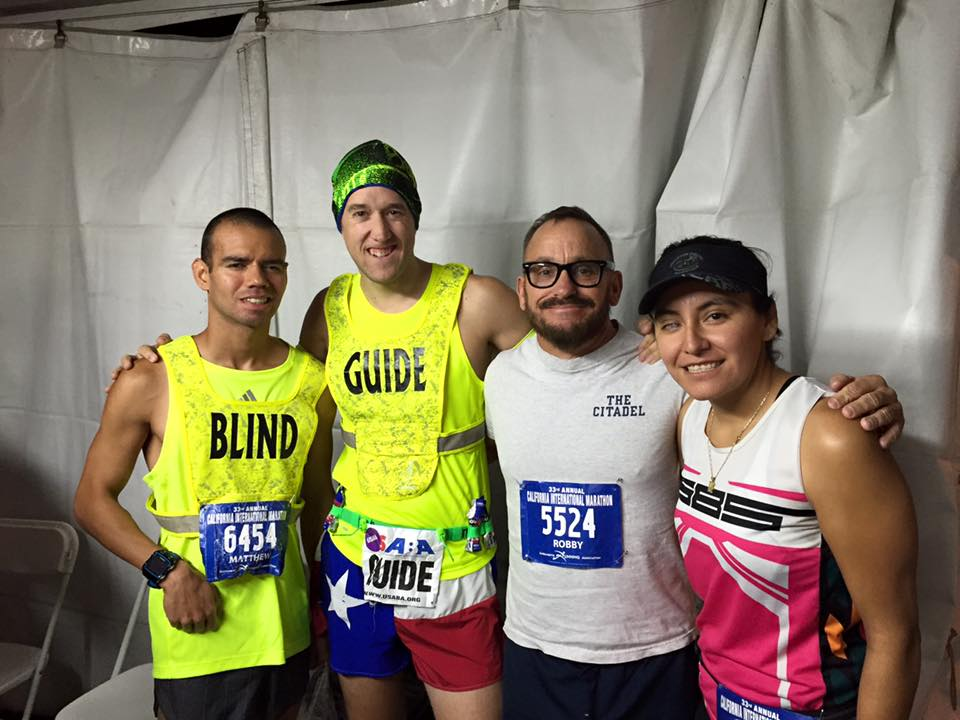