MANITOWOC — Over nearly a decade, Eric McLean went through multiple remissions and relapses before dying of cancer a year ago Friday at age 28, passing away at his parents home in Two Rivers.

Every day, something reminds Cari McLean, now 28, of her late husband whose “Confession Final” video blog has been seen on YouTube by more than 1 million viewers.

“We have a thing with owls … every time I see a rainbow … hearing a Harley,” says the young widow of just a few of the sights and sounds triggering memories of the man who relapsed a fifth time days after returning from their honeymoon in the summer of 2011.“We were getting to be normal, then all falling apart at the same time … rollercoaster after rollercoaster,” said McLean, who had days last winter when she couldn’t get out of bed. “It is OK to feel no one is out there, OK to feel alone, to grieve and cry.

“I shut a lot of people out, not that I was mad at them but didn’t want to face what was really happening … Eric’s not coming back,” McLean said in the living room of her parents, Mick and Karin Jaeger.

She said she doesn’t want any pity. She is grateful for the support of her mom and dad, sisters, Eric’s parents, sister and brothers, other family members, friends, and the community including the students and parents at MantyDance, the studio she operates at Clarkbridge Hall in downtown Manitowoc.

McLean is willing to talk about the challenges, emotional and otherwise, of life without Eric. But what she prefers to focus on is the lifesaving legacy of the Two Rivers native she first met as teenagers working banquets at the former Inn on Maritime Bay in Manitowoc.

“Now, he’s not in pain anymore but it still sucks, it stings,” McLeans says of the death of the man whose extensive bucket list of checked off items included skydiving, throwing out the first pitch at a Milwaukee Brewers game, driving on a NASCAR track and meeting Green Bay Packers.

“Getting married to me is the one (item on his list) that meant the most to me,” Cari says. “He picked me to spend his life with … he could have picked anybody, he could’ve chosen not to.”

And the one bucket list item that began during his cancer fight and hasn’t stopped is encouraging people to sign up on the Be The Match national marrow donor registry and be a potential lifesaver for those suffering from blood cancer disorders.

Eric McLean’s, brother, Mike will be in Madison on Sept. 8 for his 6th Ironman Wisconsin swimming, biking and running for L.I.F.E. — Leukemia Ironman Fundraiser for Eric — to raise funds for leukemia research dedicated in Eric’s memory.

Impact lives
Hearing a Harley Davidson motorcycle with its distinctive sound reminds her of how Eric was employed by the motorcycle manufacturer for several years after college graduation, not withdrawing a job offer after a December 2007 relapse.

McLean worked as much as he could during his remissions while the Milwaukee company kept him on the payroll through his expensive medical journey.

He thanks Harley Davidson on the “Confession Final” video, which Cari said she has seen in parts but is “scared to watch” the whole nearly nine minutes.

“I’m going to miss everyone. My family, my brothers and sisters and parents, my wife, Cari. I love you so much, babe,” he says.

He tells YouTube viewers that he always was willing to try every treatment offered. “I swung my bat hard,” he says.

“I know he cries and breaks down and says he won, and his doctor told him he won and I believe that,” McLean says. “He did beat it, just not in most people’s definition,” she says of his several years on earth after one of his many relapses.

“I would hope people would look at it and say there is a man who honestly wants to make a difference in this world, a man who gave it his all,” McLean says. “He loved his family, friends, everybody who supported him.

“He wanted to see more people aware of the impact you can have on someone’s life by donating marrow or blood,” she said. “The fact he made such an impact on so many people comforts me a lot.” 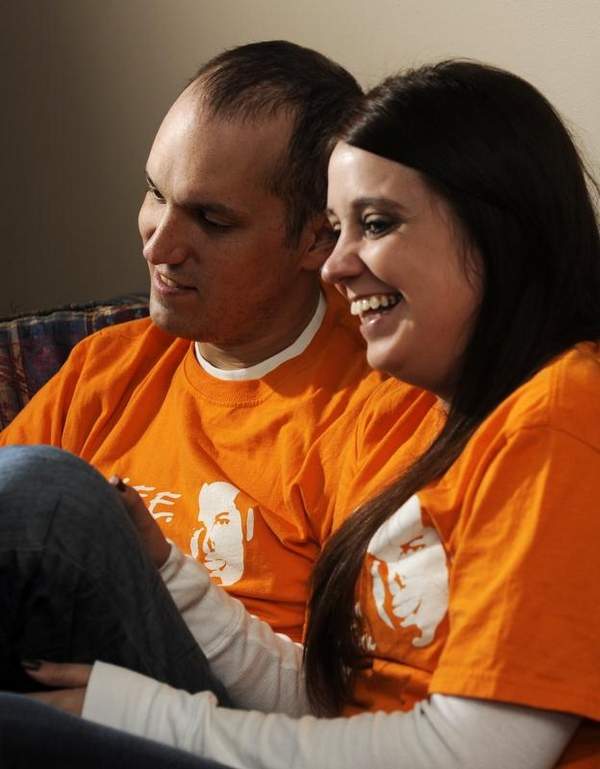 Brought together
McLean says she will see Eric again some day. “The where, the how I don’t know how that works … if there is an afterlife, that is the one place I will definitely see him,” she says.

Someday, there may be a new love in her life, but Cari is fine “not being with someone” at this time, not dating.

“I said to one of the dance parents last night he had a list of people I wasn’t allowed to date after he passed away,” Cari says. “I would never date someone Eric wouldn’t approve of,” she said, noting Eric’s parents, Mary and Brian McLean, have said they will be supportive of any future romantic relationships.

But, for now, the focus is on helping the McLean family promote L.I.F.E. and operating the dance studio. She says the girls and their parents are willing to “do anything to see me succeed, be smiling and happy, back to doing what I love.

“They have really helped big time … there is no way I can repay them for the stuff they have done,” she says.

“Cari has been a great role model,” said Melissa Breidung, whose daughter, Karly, 13, has been a student for eight years. “She’s a friend to the girls … not your typical dance teacher.”

“She’s trying to help them be better people,” said Wendy Smidel, whose daughter, Kailey, 14, has been dancing for McLean since her days as a city recreation instructor.

Such courage
Cari said Mary McLean has been “her rock” the past year. “The pain he went through was unimaginable and he did it with such courage,” she says of her son.

“His goal was to try and help other people cope at a time when he was trying his darndest to hang on … he managed to smile and laugh … he’d always say, ‘This could always suck more,’” Mary McLean recalled.

She went back to Froedtert’s bone marrow transplant unit this past year and thanked the doctors and nurses that had become their extended family over nine years. “I love these people … every time I came back they were so sad to see us and happy to see us at the same time,” she said.

She and her family review applications for help that come into L.I.F.E. “Some of the stories just rip your heart in half,” McLeans says. When a check goes out in the mail, it is a “rewarding feeling” as the family tries to pay it forward.

Mary McLean said her son’s uplifting messages on his video blogs were “one of the biggest gifts Eric left us” but, of course, do not replace being gone too soon.

“I just want him back,” she said of Eric McLean, who picked out several songs for his funeral Mass including “Somewhere Over the Rainbow” and reggae artist Bob Marley’s “Three Little Birds.”

“Rise up this mornin’, smiled with the risin’ sun, three little birds pitch by my doorstep … singin’ sweet songs of melodies pure and true, saying don’t worry ‘bout a thing, ‘cause every little thing gonna be all right.”