Yesterday and today have been two of the worst days of my life.

For those of you that read my last journal entry, I told all of you how a good friend of mine, Jason, was just rediagnosed with Hodgkin’s Lymphoma.  For those of you who did not read the journal, I had the privaledge and honor of meeting Jason at Froedtert Hospital earlier this year when I was receiving treatment…as he was receiving his treatment as well.  We had practically been roommates during our stays there, because our rooms were right next to each other.  We became great friends inside the hospital and continued our friendship outside of the hospital.  We kept in touch via instant messaging and facebook and stuff.   I am so glad to have gotten to met Jason.  Just from the context of what I am telling you, you can probably already guess what happened.

I was having a great day yesterday.  I got a lot of stuff accomplished at work and my supervisors were taking note of it.  I thought to myself towards the end of the day, “Ya know what…I’m going to go visit Jason today.”  So I called Jason’s mom to ask her if it would be okay that I came after work today to see him.  The last I heard, Jason was starting up chemotherapy again…this was last Wednesday.  I wanted to go see him at that time but I know what it’s like to have visitors and such when you’re getting chemo.   So I waited a few days.  Well, when she picked up the phone, I could instantly tell something was wrong.   Her voice was shallow and unresponsive.  I knew right away.  I quickly asked her, “What’s wrong?!”  She said, “He’s not going to make it, Eric.”  Instantly, my entire body just locked up.  My emotions started spiraling out of control and all I could think about was Jason and his family. 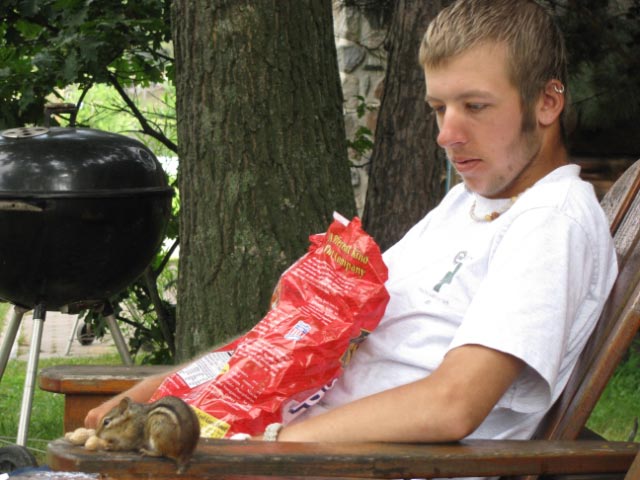 Two weeks ago, Jason was on vacation with his family, fishing on a lake.   Jason and his family had just got back from their vacation and had to go into Froedtert because Jason was having some issues with his lungs.  After a chest x-ray, the doctors determined that Jason had a lung infection in both of his lungs and they wanted to perform a lung biopsy to find out exactly what was going on.  Two days later, Jason and his family were informed that the xray was not actually showing that Jason had a lung infection, but that Jason’s lymphoma had relapsed in both of his lungs and Jason was once again going to have to fight for his life.  It was at this point that I went in to go visit him.  I was originally going in to visit him because he had a lung infection but now as I was going in it was due to a much more serious condition.

Jason started his treatments shortly after the diagnosis, and was responding well to the treatments.  The Hodgkin’s had stopped progressing and his chances of pulling through this were looking good.  I always knew Jason was one hell of a fighter, and I was so sure he was going to pull through this without a hitch.  But when I called his mom yesterday to see if I could go visit him, all of that had changed.   Jason’s body just couldn’t take it anymore.  His lungs were overcome with disease and his body was rapidly shutting down.  When I had talked to his mom, Jason was being sedated and wasn’t in any pain.  As I sat there and talked with her on the phone, I tried to imagine what he and his family were going through and there was no possible way that was going to happen.   I’ve never been in the situation where there was no hope – where there was no way I was going to make it through.  My whole body was overcome with emotion.  For a bit, I contemplated going in to go see Jason one last time, but I just couldn’t do it.  There was just no way I would have been able to go in and see him…and I hope to God that I never regret that decision.  For the rest of the day, I couldn’t get over the fact that Jason wasn’t going to be with us anymore…and at 3:35am this morning, Jason passed on.

Why is it that someone can smoke three packs a day for 40 years and live a long and apparently healthy life?  Why does shit like this happen to young people all over the world?  How is it fair that person A will make it while person B will not?  There are so many questions I have that will never be answered.  Cancer is probably the most volatile and vicious disease that affects each and every one of us.  And today, it has affected me in a way which I will never forget.  This disease pisses me off so much the more I think about it.

The only comfort I feel, is the fact that Jason is no longer in any pain and is in a much better place than all of us now.  He will forever be a part of me and I will never ever forget him.  My thoughts and prayers go out to his entire family.