Well, it’s been one very crazy week.  Where do I even begin.  I guess I can kind of start where I left off last week talking about how my younger brothers bachelor party was coming up.  Well that was this past weekend.

I met the crew at the Mariott hotel in Milwaukee at around noon on Saturday.  After we were all gathered up, we headed over to the Rock Bottom Brewery to begin the Brews Cruise.  The day kicked off with a couple of beers in the basement of Rock Bottom…and no, I’m not drinking alcohol in any of these pictures. 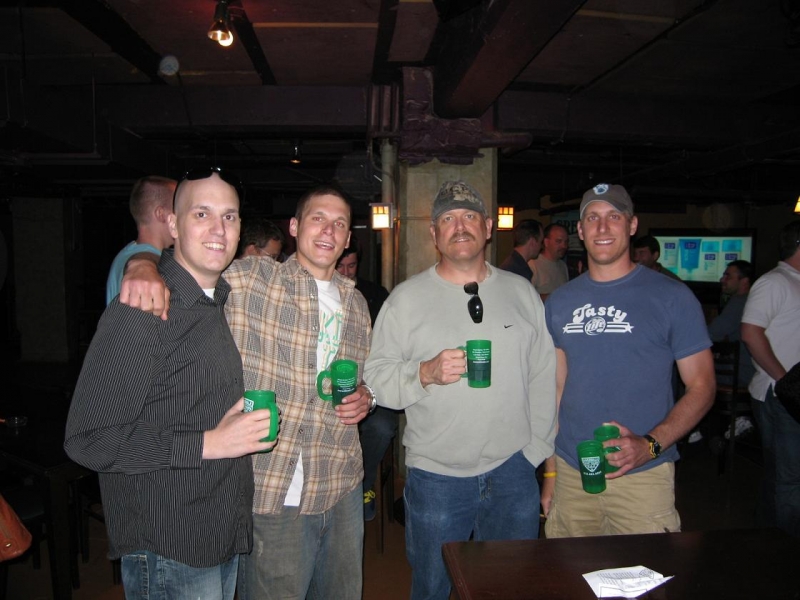 We played darts, pool, and had a great time.  From there, we went outside to get ready to go for a riverboat tour of two other brewerys located along the river: The Lakefront Brewery and the Milwaukee Ale House. 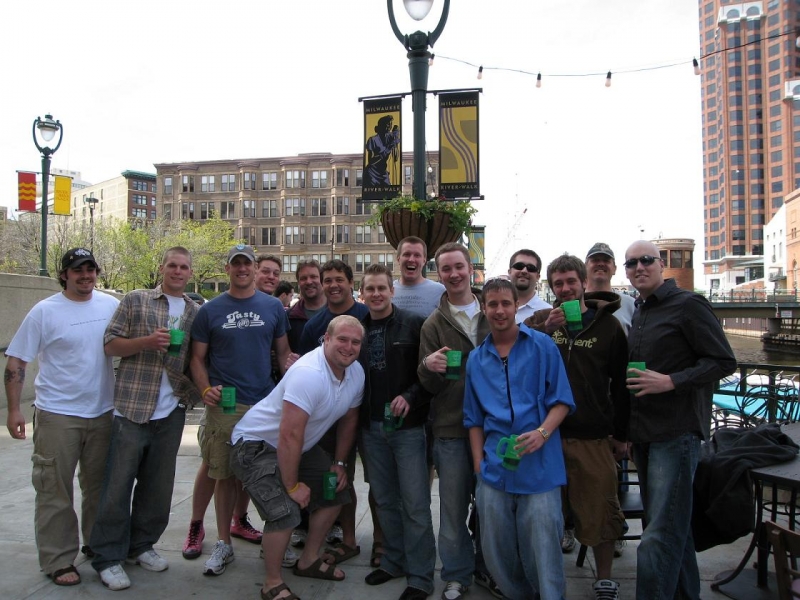 I was having an absolute blast, even though I was the only person even close to being sober at this point.  Keep in mind, I’ve been holed up in a hospital room or my bedroom for the past 6 months so this was a thrill.  Breathing in the fresh air, feeling the sun on my face, and the wind blowing through my hair…oh wait maybe not that.  But anyways…everything is so damn awesome to me now.  I mean, I can say this has been like this ever since this happened the first time back in 2003.  But going through everything AGAIN and coming out on top AGAIN is truly a blessing.  There isn’t a moment that goes by that I am not thankful for.  Lance Armstrong once wrote, “We are the lucky ones.”  It took me awhile to understand that throughout the first ordeal, but I quickly began to realize what he was saying.  I am a forever changed person and one that will NEVER take anything for granted.  I only wish that everyone else also felt the same way.  I think there would be a lot less strife and turmoil in the world.  Alright, back to the story….quick pic first – us on the riverboat. 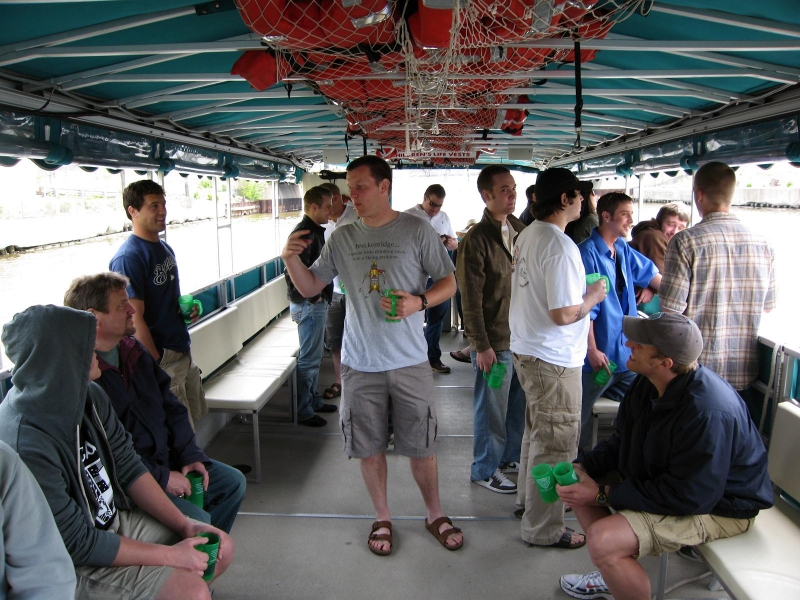 We then toured Lakefront Brewery and headed over to the Milwaukee Ale House for a tour there as well…drinking beer all along the way of course.  Well, by the time the entire event was complete, everyone was pretty much trashed.  So what better time to go to a fine dining restaurant than now.  One of the guys with us, Jake, is a manager at the German fine-dining restaurant Mader’s.  Taking his 50% discount, we headed over there for some fine cuisine.  There’s nothing quite like 20 hooligans storming into a very classy restaurant all drunk and loud and interrupting everyone in sight.  We soon found a room in the back where we could make all the noise we wanted. 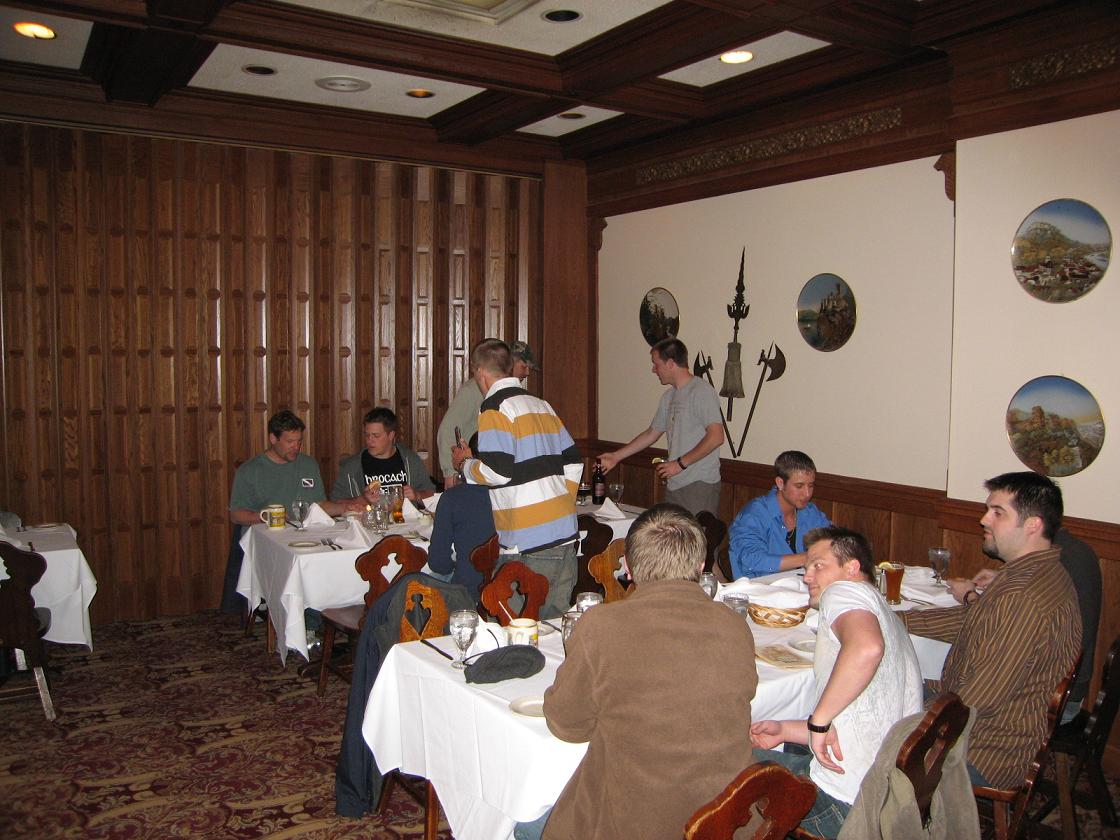 After dinner, we promptly headed out to the bars near Water St.  This is where my fun ended.  Very soon after we pulled into the first bar, I began noticing this lower back pain that I’ve been having on and off for the past few weeks.  Every time that I get this lower back pain, it is soon followed up by SEVERE stomach/abdominal pain.  Now when I “severe,” I mean it.  It is by far the worst pain I have felt probably since the 2003 bout.  And I have been through some pretty crazy stuff.  Being someone that has never been through childbirth, it probably isn’t fair for me to compare this to that; but I think I can safely say that it’s worse than childbirth.  Within a couple of hours, it absolutely cripples me to the point where I can do nothing but crawl into the fetus position and groan in tremendous pain – lasting for 6-7 hours.  So, unfortunately, this painful episode ended my night with the bachelor party.  I had an awesome time and am looking forward to the rest of the summer, which is filled with more events.

I also got ahold of Harley-Davidson towards the end of last week and we talked about getting my computer and my desk ready and my official start date and so forth…so things on that end were looking up!

I took it easy for the rest of the weekend, sleeping almost 24 hours straight from Sunday to Monday.  On Tuesday, I went to the Brewer game with a handful of friends from high school.  Despite the cold weather and once again the insane abdominal pain the second half of the game, I had a great time.  It was strange, because on Monday I went over to a friend’s place for Memorial Day where we grilled out.  It had to be 80+ degrees…and then on Tuesday, it was in the 40s.

Also on Tuesday, I had another doctor appointment at Froedtert.  It began with labs at around 9 and then my line removal at 10am.  The line removal was kind of gross because the guy had to cut it out from my chest.  They have some sort of a cuff that is on the line that adheres to the vein going into my heart.  As he cut away, I could hear all of the connective tissue tearing away.  I joked with him about how gross the sound was.  He said I was the first person to ever even mention the noise.  Anyways, I got the line out and was already starting to feel better. 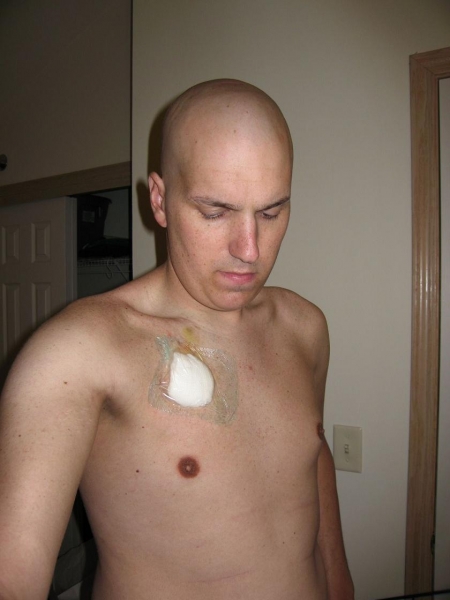 Oh, and as you can see…still not an ounce of hair.  It sure is taking its time.

Anyways, soon after I got my line out, I received a call from Harley-Davidson.  Keep in mind, I was all set to start the very next day; Wednesday.  It was the woman who I have been in contact with for the past 6 months.  She started out by giving me a talk about the economy and how it is really taking a toll on Harley.  She then went on to talk about how Harley is dealing with layoffs.  I could already tell where the conversation was going.  She told me that she was going to have to call me in another couple of weeks until after the dust settles to let me know what direction we are going to take.  So yeah…that totally bummed me out.  The rest of the day…well I guess the next couple of days I was kind of depressed over the entire thing.  This whole time I had been so hoping that everything was going to work out beautifully and sometimes that just isn’t the case.  No matter how hard you work, there is always a chance that there is going to be something there to hold you down.  So these past few days have been pretty low.

Well this morning, I got another call from Harley.  It was some guy who I hadn’t talked to.  He brought up the fact that he has it down that my start date will be June 9th.  Immediately I was filled with relief that my job was still secure…as I had once previously thought.  Well a couple of hours later, the woman who I have been talking with called me once again.  She told me that the man who called me earlier had informed me of my start date which was based off of old data and that the conversation that we had earlier in the week still stood…..sigh.  All I could do was sit there and take it.  I know it’s not her decision and that these things all come from management….but I was filled with more disappointment than I have felt in a very very long time.  Anyways…I will wait the next 2-3 weeks for Harley to get back in contact with me to inform me of my fate – good or bad.

As for this coming weekend? …I think I will head up to Two Rivers again to try to finish The Sopranos with my dad, visit with my mom, and teach my sister how to drive stick.

Take care everyone and have a wonderful weekend!