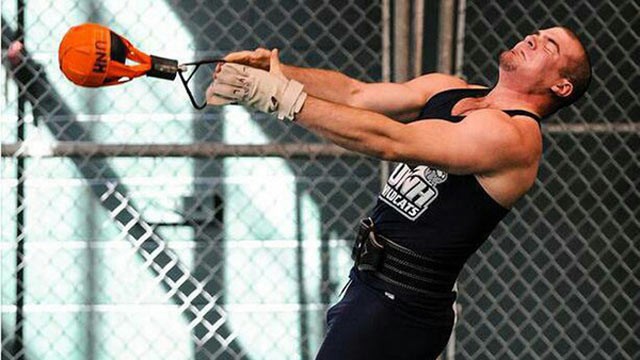 The #1 thing on Eric wanted to do on his Bucket List was to get as many people as he possibly could to sign up on the bone marrow registry.  Read the story below about a senior thrower on the University of New Hampshire track & field team who just gave up the final weeks of his career to save the life of a complete stranger.  What an awesome story, this guy is a hero. If you’re not on the bone marrow registry already, it’s time to sign up today.
April 23rd, 2013 – ABC News –
Cameron Lyle, a Division I college athlete in New Hampshire, has decided to shorten his athletic career for a chance to save a life.
The University of New Hampshire senior will donate bone marrow Wednesday, a decision that abruptly ends his collegiate athletic career but one that he calls a “no brainer.”

Lyle, 21, had his mouth swabbed to join a bone marrow registry two years ago in the cafeteria at school. He didn’t think any more of it until a few months ago when he got a phone call that he might be a match. He took more tests and discovered a month later that he was a perfect match.

“When they first told me, I was like, ‘OK, cool. I’m definitely going to do it,'” Lyle said. “After that I kind of went to tell my coach and then I realized slowly that my season was over.”

Lyle’s main events are the shot put and the hammer throw.

“It’s just a sport,” he said. “Just because it’s Division I college level doesn’t make it any more important. Life is a lot more important than that, so it was pretty easy.”

Lyle competed in his last competition Saturday and said it was “kind of emotional.” His teammates rallied around him to cheer him on.

The man who needs his help is a 28-year-old suffering from acute lymphoblastic leukemia. Lyle was told that the man only has six months to live without the transplant.

Lyle of Plaistow, N.H., said he had been told there was a one in five million chance for a non-family match.

“It was kind of a no-brainer for a decent human,” Lyle said. “I couldn’t imagine just waiting. He could have been waiting for years for a match. I’d hope that someone would donate to me if I needed it.”

After he got the call, Lyle knew he needed to speak to his mom and his coach.

“My son and I have a pretty funny rapport together so when he tells me things, it’s usually in humor,” mom Chris Sciacca said. “He simply sent me a text that said, ‘So I guess I have a chance to save someone’s life.'”

The two sat down and talked through the decision, but Sciacca said it was ultimately a decision that “came from his heart.”

“I know my son very well and I know where his heart is and I knew that he would make the right decision.

“He made his decision. He gave up his college season to do this. He’s a gentle giant,” Sciacca said of her 6-foot-2-inch, 255-pound son. “He’ll do anything for anybody.”

What Lyle was most nervous about was telling Coach Jim Boulanger, who has been his coach for four years.

Boulanger said that a nervous Lyle came into his office, shut the door and told him he wouldn’t be able to throw next month at the America East Conference championship for which he had been training.

When Boulanger asked why, Lyle told him and found that his coach was completely supportive.

“Here’s the deal,” Boulanger told Lyle. “You go to the conference and take 12 throws or you could give a man three or four more years of life. I don’t think there’s a big question here. This is not a moral dilemma. There’s only one answer.”

“He’s very approachable. He’s very funny,” Boulanger said. “I don’t have any doubt that he’s very compassionate and it was just a given that he’d do it.

“You can’t ask for any more out of a person than to help another person,” he said.

Lyle’s mother is just as proud.

“I am beyond words proud. He is my hero,” Sciacca said. “When your children inspire you to be better people, you know it’s come full circle and he’s inspired his mom to be a better circle.”

Lyle will make the bone marrow donation Wednesday morning at Boston’s Massachusetts General Hospital. A needle will be used to withdraw liquid bone marrow from his pelvic bone. After the surgery, he will not be allowed to lift more than 20 pounds over his head, which rules out all his athletic events.

Lyle and the man have to remain anonymous to each other for at least a year, but can then sign consent forms to release their identities if they want.