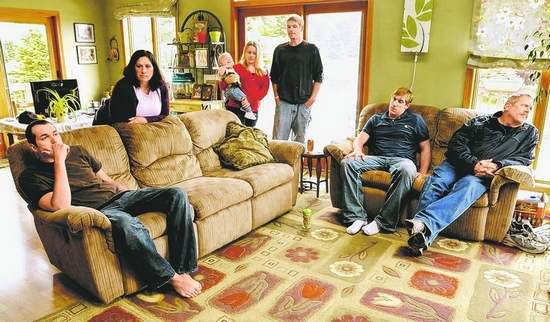 TWO RIVERS — When the news came this time, Eric McLean was alone, sitting in a patient room at Froedtert’s Life clinic in Milwaukee.

It was there that the 24-year-old Two Rivers native was told for the third time in his life that he has cancer.

Eric left the cancer center in a daze, stopped on the hospital’s front lawn and picked up the phone to call his mother, Mary McLean. On the other end of the line, she expected to hear, “Happy birthday, mom.” Instead, she was greeted with a nightmare.

“The anger and the unfairness of this is just so consuming,” Mary said Tuesday — four days after getting that call. “I told him, ‘I brought you into this world; I’m not going to let you go without a fight.'”


And fight is exactly what Mary, husband Brian, adult children Mike, 26, Steve, 23, and Lindsey, 18, and Steve’s wife Ashley, 22, and daughter Ava, 1, will do for their son, for their brother, for her uncle. After all, it’s nothing they haven’t done before.

A history of hurting

Eric first was diagnosed with Acute Myelogenous Leukemia in June 2003. He received high-dose chemotherapy treatment and a bone marrow transplant courtesy of older brother Mike. He went into remission and went back to college at the University of Wisconsin-Whitewater in the fall of 2004, graduating in December 2007 with a degree in Management Computer Systems.

While home in Two Rivers that year for Christmas, he landed in the hospital with bad nosebleeds, bleeding gums and a persistent bruise. Again, he went through chemotherapy and a bone marrow transplant — this time from younger sister Lindsey.

Both times, doctors said survival was possible. This time, though, they say a cure is no longer in the picture. The cells detected in Eric’s body survived both transplants and rounds of lethal chemotherapy.

Today, he is left only with a choice: live his life to the fullest without the pain and frustration of treatment, or undergo another round of chemotherapy and hope for an extended — but not saved — life.

For Eric and his family, it only makes sense to do a combination of the two.

“If I don’t do anything, I’ve got a zero percent chance,” Eric said Tuesday morning, sitting somber in his parents’ living room with his smiling niece in his lap. “But I’m not ready to die. Maybe they’ll come up with something new.”

Knowing — but not quite believing — that he should be dead in a matter of months, Eric has decided to spend a few weeks living out his wildest dreams before submitting his body to another round of chemotherapy.

“I don’t know that I will ever come to terms with (the idea of him dying) — even when he’s not with us anymore,” Mary said. “But we’re going to build lasting, lifetime memories. We have to. That’s all we’re going to have left.”

The family hopes to travel to Europe in the next couple weeks, living out Eric’s dream of visiting Rome, Florence and Athens. They applied Monday for passports and are working to get in touch with Lindsey, who is quarantined with swine flu while going through basic training with the U.S. Air Force. She hasn’t yet been notified of her brother’s prognosis or her family’s plans to get her home.

“I’m going to try to do as much of this type of stuff as I can before (the cancer) gets going out of control,” Eric said. “I’ve gotta pretend like it could all happen tomorrow.”

And he certainly won’t be alone in the days ahead.

“All plans that I did have are on hold indefinitely,” said Mike, who lives in Madison. “Work is no longer a priority, neither is school, neither is anything.”

“We’re just going to try to spend quality time with him,” Steve added. “We need to bond.”

Eric also hopes to get a video camera and “vlog” his remaining days through an online YouTube channel.

“I don’t really know what I’m going to say, but I guess I’ll figure it out,” he said. “My intent from the get go … was to reach people.”

Wrestling with the unknown

Over the past six years, the McLeans have raised more than $27,000 for the Leukemia and Lymphoma Society for cancer research. Mike has done most of the work, creating the Leukemia Ironman Fundraiser for Eric (L.I.F.E.) in 2003 to draw attention to the illness while running the Ironman Wisconsin that year. He ran the race again in 2008.

Now, the family is asking for donations for another cause.

“As hard as it is to ask for more when people have given us so much … our priority right now is to help him get through his bucket list,” Mary said. “(The cancer cells) are there — they’re there to stay. We can only hope we can keep them quiet and out of sight for as long as possible so we can enjoy the time we have left together.”

The same Web site that has long solicited funds for leukemia research now is working solely for one of its could-be victims.

“The fact that I could die just doesn’t compute,” Eric said. “I could do 100 jumping jacks right now if you asked me to. I feel good.”

The family went back to Milwaukee on Monday to meet with doctors for more detailed discussions on Eric’s health.

“We were hoping to get a timeline from the doctors,” Brian said, “but the only thing new was they admitted they can’t fix it.”

Eric is willing to try alternative treatment, but he hasn’t yet come across a legitimate option.

“The doctor made it all pretty clear,” Mike said. “If we don’t (spend time together now), we’ll miss it — we’ll miss our window.”

After a few weeks living out his dreams, Eric says he will head back to Froedtert’s Life clinic and check in for the chemotherapy he’s learned to hate. He hopes the treatment will succeed in slowing the progress of his cancer and afford him more time on Earth. But in all the days and minutes in between, he’ll be waiting, wrestling with the unknown.

“I don’t know how this all ends,” Eric said.

“He’s too young,” Mary added. “You’re not supposed to bury your children.”

To learn more about Eric, donate to his bucket list or donate to leukemia research, visit https://www.givetolife.org.