Well, it’s been awhile since I’ve last written so I figured I would give everyone a detailed update as far as what has been going on with me.

Last weekend, I went down to Whitewater to visit my old college friends. With the little time that I have left before I go back, I want to get out and about as much as possible. We did all sorts of things while I was there. We went over and hung out with some friends of ours and had a few beverages in the process. Afterwards we went to one of the local bars where I ran into a handful of other people that barely recognized me. A few of them had no idea that I had relapsed, but after they saw me and my baldness they figured it out pretty quickly and were pretty devastated/shocked. We also drove down to Janesville and went to the mall and other various stores. Oh, and we had to make our traditional trip to Famous Dave’s for some BBQ and beer. All in all, I had a great time and look forward to going back down there at least one more time before I head back to Froedtert on the 31st.

On Sunday I went back to New Berlin and spent the day/night there. I got to see my current roommates again and played some video games and such with them. The next day I headed over to Madison to do the interview with NBC with my older brother, Mike. We had a great time and are very grateful that NBC invited us to the studio for the live interview. It was a great experience and I am absolutely thrilled that L.I.F.E. got that kind of exposure. To be able to reach the amount of people that we did through the live interview and the taped segment made me feel great. If you haven’t seen either of the video clips yet, you can go to the following links to watch and/or read the articles and interviews.

Here a just some pictures from the studio that we took.

After the interviews I drove back to New Berlin to spend the night. I woke up the next day and drove back to Two Rivers. I spent the next few days just relaxing and watching various movies and tv series with my parents. My dad was still recovering from the stomach surgery he had just a couple of weeks ago. Just today he went back to work… His episode with hiatal hernia lasted much longer than expected. It’s only supposed to be a 1-2 day operation with maybe a week recovery. It’s now been four weeks.

On Thursday, I had to go down to Froedtert for a full day of testing. We left at about 6:00am to make it there by 8:15am for my blood labs. They drew blood and attempted to place an IV in my arm because I was going to need it for some of the tests that they were doing to me. After 15 minutes of poking my arm with a needle, they gave up and told me to come back later to try again. I’m usually pretty good with needles, especially because I have probably been stuck with over one thousand of them since 2003…but this time it was extremely uncomfortable having her push the needle in and out of my arm with no success. Oh well…

The first test was a bone density exam. All I had to do was lay down on a table and yank down my pants while a machine took pictures of my upper thigh/hip area. You’d think that pulling down my pants in front of a rather attractive nurse would make me nervous, but I’ve done it so many times at this point that I think I could probably stand naked in front of 10,000 people while singing the National Anthem. Anyways, it only took maybe 10 minutes to take all the pictures they needed.

From there, I went to a different room where they had to once again attempt at placing an IV into my arm. They needed to withdraw some blood from my body. The person doing it this time was maybe 10-15 years older than the girl who was doing it the first time so I was fairly confident in her experience that it was only going to take one poke….Nope! Another 10 minutes later, she finally hit a vein. But wait! Oh no! Five seconds later the IV slips out of the vein and she loses it. She throws away the IV and pops out another sterile one from the drawer to try again on my other arm…blah. Another 5 minutes or so later, she finally gets it and tapes it down to my arm with about a pound of duct tape. She withdrew some blood and asked me to wait in the waiting room for 30 minutes. They inject a radioactive isotope into the blood. This test is known as a MUGA. They then put the blood (now with the isotope floating around in it) back into my IV and take pictures as it flows through my circulatory system. It consisted of my laying absolutely still for 3 pictures taking 10 minutes each.

I now had a good hour and a half before I had my next test, so I met up with a girl I went to high school with. She contacted me a few months ago and we have been kind of pen pals since then. She has been going through various tests at Froedtert as well and just happened to be at the hospital that morning. We met up at the cafeteria where she had a piece of cherry cheesecake waiting for me from the Cheesecake Factory. OOOOOHHH!!!! But wait! Shit! I can’t eat it yet because of these damn tests I have in the afternoon! The cheesecake would have to wait… Anyways, we talked for maybe 30 minutes or so and had a really good conversation. Her mother was there also and it was nice seeing her again as well. If you’re reading this, thank you for the cheesecake! My last appointment on Thursday was over at about 2:50…I think the cheesecake was gone at 2:52pm.

The next test in store was the treasured bone marrow biopsy. Oh how I love these. If you would like to read a very detailed description of what a bone marrow biopsy is and haven’t read the previous article explaining it…click HERE. I prefer having men do it because they are stronger and are better able to core into my bone quicker. This time there was a woman doing it and I knew it was going to be 20 minutes of “drilling.” Sure enough, it took at least 15 minutes for her to finally get deep enough to pull out a core of bone marrow and some of the fluid. *insert agonizing pain here*

After the biopsy, I had to go to a different area in the hospital for another test. They handed me about about 40 ounces of this orange Tang kind of drink. No arguments from me…I haven’t had anything to eat or drink in a long time so I drank it without a hitch. Oh, it should also be noted that I wasn’t allowed to eat or drink since midnight the night before. This is to clear out my urinary and digestive systems so that they can take clear pictures and so forth. So this orange drink has some sort of markers in it that when I drink it and it goes through urinary system, it will dye my organs or whatever so the CT scans can see whatever they need to see.

And lastly, I had to do a pulmonary exam which basically tests my lungs to see how much air they can hold. It lasted 30 minutes or so and consisted of me breathing very heavily into and out of this tube with rather irregular breathing patterns.

So that was the end of my hospital visit and my mother and I headed back to Two Rivers for the night.

I would also like to note that as I was writing this article, we surpassed the $5,000 mark! I cannot even begin to express at how grateful I am to all of those who have contributed to our cause. Thank you all for the tremendous support!

I spent this past weekend relaxing some more. My fatigue level still isn’t where I would like it to be. I can get kind of tired just from standing up for too long or walking around too much. It’s inconsistent too. So some days I might feel like I am able to run a marathon, while others I feel dead tired. Either way, I took it easy this weekend.

I got a phone call from one of my best friends, Jason. He came up with the idea for a group of us to head down to Phoenix for a week or so to watch the Brewers at spring training camp. I was very interested in the idea and immediately said, “Yes” to the 30 hour road trip. Those who were also able to come along were Nathan and Elijah. As the past few days have developed, however, we aren’t sure if we are all going to be able to take vacation during the days that we need to all head down. So we started thinking of other more local possibilities for a vacation. I came up with the idea of driving to the Outer Banks of North Carolina right on the Atlantic Ocean. One of my elder friends (Hi Tom!) owns a beautiful home down there and I asked him if we would be able to stay at his place for a few days. He told me, “yes.” So we have another option. I don’t think we have made any final decisions as to where we are for sure going, but it sounds like North Carolina is most likely. We will probably head out Friday or Saturday and come back sometime near the end of next week.

As for the next few days, I am going to pack up the majority of my stuff in Two Rivers and head back down to New Berlin.

Once again, thank you all for all of your support! This is going to be a hellish experience coming up here in April. I am not looking forward to it one bit. I guess the reason for that is that I am finally starting to feel “normal” again and want to keep the good times rolling. However, if I don’t go back and get the treatment that I need, my cancer will 100% come back within 6 months or so.

Take care! …and if you do pray on an occasional or daily basis, maybe pray for some warmer weather! It’s too damn cold out there to walk around without any hair! 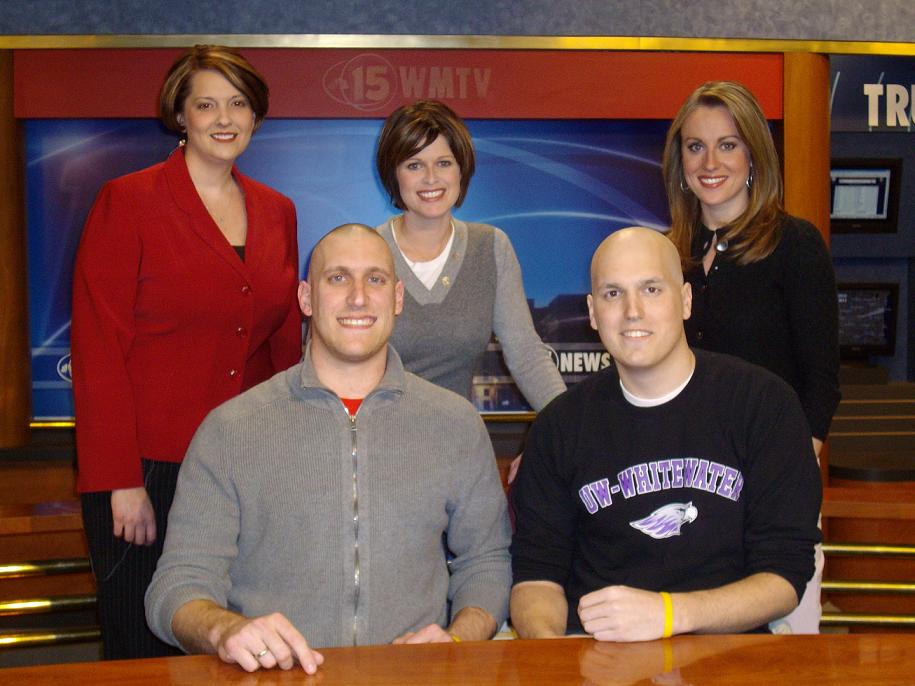