I know, it’s been awhile since I last wrote.   Quite frankly, it’s just because I haven’t had a whole lot to say.  Every time that I write on here, I want to have some sort of residual message that people will maybe remember.  Nothing too huge has happened in the past few weeks.

A bunch of people have been asking about my biopsy results from way back when and I thought that I had addressed that on here but I guess I did not.  I suppose the absence of any report from me is probably good news, because I am sure you would have all read or heard about it if I had relapsed.  Well, the results came back good.   There are still no traces of leukemia in my bone marrow and I am now officially 100% Lindsey (my sister).  They do some sort of test called a FISH test that is able to determine what percentage of me is left versus what percentage of my donor I am.   Well in this case, I didn’t change from me to Lindsey.  I changed from Mike to Lindsey.  So I am no longer Mike.  Sorry Mike…guess your genes just aren’t up to par.   Being the inferior of the bunch of us, I had a suspicion that Mike just wouldn’t pan out.  Unfortunately, not only did I inherit his weak immune system, but I’ve also noticed a shrinkage in a certain body part of mine…thanks a lot Mike.   Love ya bro!  ZING!  …guess I kind of burned myself there too – oh well.

The truth of it is, is that Mike’s donated stem cells gave me another 4-5 years of happy life that I wouldn’t have had.  He’s done more for me than I could ever have imagined, and I love him to death.  Now it’s Lindsey’s turn to put this thing to rest for good!

Also, last Wednesday I noticed my feet starting to get pretty swollen.  By Thursday, it looked like my feet and ankles belonged to a 450lb man instead of a 185lb man.  They were and still are completely full of fluid.  Way back in March, after my trip to Florida, my feet did the very same thing right before my transplant.  We didn’t have any explanation for it then and don’t have a good explanation for it now.  Part of it may be because I recently started a pretty vigorous exercise/diet program.  That could be the reason but I guess I don’t know.  All the doctors tell me to do is to avoid salty foods (which I’ve been doing to begin with) and to elevate my feet while laying in bed as often as possible.  I slept last night with my feet elevated on a whole bunch of pillows, and I woke up today and noticed some improvement.  So hopefully they will continue to keep getting better.  For the time being, it’s literally impossible for me to put shoes on and even socks are a challenge.  I went to the store last night and bought the biggest pair of slippers I could find so I could still come into work.  So far, that seems to be working out well.  I think that even after my feet get better, that I will continue wearing these to work.  So comfortable! My mom suggested that I throw some pictures of my swollen feet on here, but I think another picture of my niece, Ava, from Halloween would entertain my viewers more! 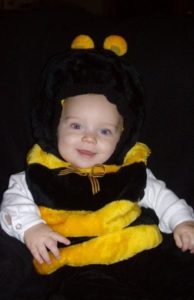 Yeah, I’m pretty sure that is the cutest damn bumblebee I’ve ever seen!

I’m sure I will have much more to say when Thanksgiving comes around.  I’m planning to head north to Two Rivers on the Wednesday before Thanksgiving to go to a hockey game with my Dad in Green Bay.  I’m betting my entry for that weekend will have a whole lot to do with “being thankful.”  Plus I’ve also got a lot of other things on my mind right now which I am considering talking about on here.  Might be good for me to write about…therapeutic even.  I don’t know, we’ll see.

Anyways, have a great weekend and everyone can look forward to the upcoming holiday season and all of the wonderful snow and ice that is on the way!!!  HURRAY!!!!

Have a good one! 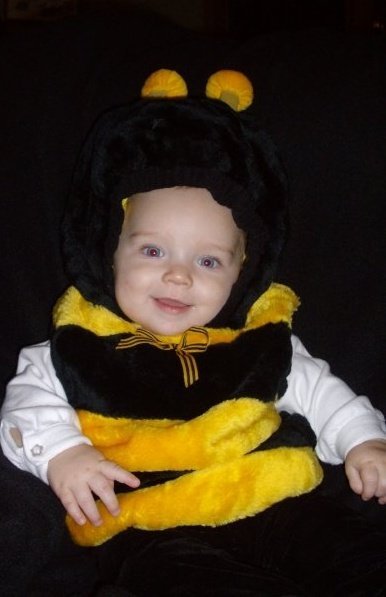