The beast is loose!

I suppose the title of the blog entry this week could be looked at in a couple of different ways.  The beast, could refer to my Harley, or it could also refer to my illness which is in remission…so let’s address the illness portion first because that’s usually how I go about writing these blogs – talk about my doctor visits, then get to all of the cool stuff not related to cancer and stuff.

So, I left off last time talking about my GVHD and what all of that has been up to.  With the drugs that they have had me on, the effects from the graft versus host disease have been less severe and more tolerable.  My eyes aren’t nearly as red and dry, and my mouth is getting better as well…meaning that I am somewhat producing a normal amount of saliva.  There are times when I can still tell that I am struggling to swallow a dry piece of food, but for the most part, it’s pretty manageable.   All-in-all, the GVHD isn’t really one of our biggest concerns at the moment…there’s something else going on that has me quite a bit more worried.

If anyone noticed, April 4th, 2009 marked my one-year post transplant anniversary.  It’s kind of a big landmark and Mike informed me that some patients call their anniversary date of their transplant their “re-birthday.”  Meaning, that now that a large portion of them is of their donor, that they are somewhat “reborn” on their transplant day.  So anyways, I guess I had my “re-RE-birthday” being that this is the second transplant I have now had.  Also, on the one-year post transplant date, or near it, all patients are required to go through a regimen of tests to see how the body is recovering from the treatment.  This includes lots of blood work, pulmonary function tests, a bone marrow biopsy, and other various scans and exams.

A couple weeks ago, my dad drove down to Milwaukee to take me to my one-year post transplant appointment of awesomeness.  We first ran over to the east clinics to quick get some pulmonary function tests completed to test my lung capacities and that kind of stuff.  Right from there, we had to go straight over to the Cancer Center for a lovely biopsy.   In order for me to get some conscious sedation (loopy drugs), I needed to have someone there to drive me home afterwards.  My dad was more than willing to volunteer to help out.   You all pretty much know how these things go by now…so I won’t bother going into detail.  If you feel inclined to read up more on my bone marrow biopsy experiences, feel free to use the Search feature on the upper right hand corner of this page….search for “biopsy” or something.  Well, once we were done with the biopsy, we spent the rest of the day sort of hanging out.  I was in a reasonable, but tolerable, amount of pain, so I suggested that we head over to the Harley-Davidson Museum.  This is somewhat off-topic, but that’s how I roll, and this is my blog where I can write whatever I feel like…so yeah, we went over the museum and I showed him around.  He signed up for motorcycle lessons this coming June and is talking about buying a bike in the near future!  I have no clue where he got this sudden interest to ride a Harley….don’t look at me, I had nothing to do with it!

Alright, back to my health…it takes about a week or so for the results to come back in for these biopsies, but I wasn’t worried much about the results so I just went the next week without much worry.  A week later, this past Thursday, April 9th, I took off of work and my mom came down for my appointment where they wanted to give me the results and such.   As Dr. Bredeson came into the room, I could kind of tell that something wasn’t quite right.  His voice, his posture, his whole attitude…everything just seemed off.  And then he started reading off the results of the biopsy.  If you all can remember, the last biopsy I had, they did some tests to see what percentage of my bone marrow was still “Eric” and what percentage of my bone marrow was now “Lindsey.”  Well, at that time, the results came back conclusively that my bone marrow was 100% “Lindsey.”

I guess before I go any further into this, I should explain a little more about what EXACTLY is going on.  Here goes nothing… our genetic makeup consists of 23 chromosome pairs…22 of those are autosomes and 1 of those is the sex chromosome which determines your gender and such.  The other 22 are responsible for pretty much everything else.  Well, I have what is called a T9/11 translocation of my 9th and 11th chromosomes.  This means that part of my 9th chromosome is attached to my 11th chromosome.  So what the heck does that mean?  Well, from what I understand, and I could be wrong, but my bone marrow has that same chromosomal pattern…and with that pattern it is inclined to produce leukemia cells.  The whole theory and purpose behind the bone marrow transplant, is to reprint and replace that bone marrow with an entirely different bone marrow WITHOUT the T9/11 translocation.   This essentially eliminates the possibility of producing anymore leukemia cells.  So my last biopsy determined that 100% of my bone marrow was now Lindsey.  Well, as Dr. Bredeson started explaining to my mother and I what was going on, I started to begin to understand a little more about everything.  So here is what he said in a nutshell…and I am paraphrasing here so bear with me: “Your biopsy results, of the sample that we took, indicate that there is still some of “Eric” in your bone marrow.  This means that there is a possibility that those “Eric” cells that are there have the T9/11 translocation and are fully capable of producing leukemia cells.  We do not know exactly what percentage of those “Eric cells” are T9/11 cells.  We are going to need to do more tests to determine that.  We don’t know what we are going to do from here, but for the meantime we need to get you the hell off of prednisone and prograf as soon as humanly f%*$#ng possible.  The prednisone has been weakening your “Lindsey cells” to lessen the effects of the GVHD…however it has also given the “Eric cells” a chance to come back, which apparently they have.”

Basically, what I got out of it, it sounded like if something isn’t done as soon as possible, and I don’t know what that something is, but it isn’t a matter of “if” my cancer will return…but “when” it will return.  Yeah, he had me scared pretty bad.  And he’s not one to put on a frown, but I could read his face like a book that day and knew something was up.  I’ve got another follow-up appointment this coming Friday, that I believe both of my parents will be coming down for.  I should know a bit more about what exactly is going on at that time.  In the meantime, stay cool – stay calm.

Now that I got that piece of awesome information out of the way, I can talk a bit more about other cool stuff.  So, after the doctor gave me the results of the biopsy, my mom drove me back to Two Rivers.  It was a fairly nice day that day, so I brought my backpack along and filled it with all of my leather riding gear.   My plan was for her to drive me north to Two Rivers, and then that afternoon I ride my Harley out of storage and back down to Milwaukee on I-43 in the 40-45 degree temps.  So I did just that…we drove up, I ate some lunch, put on my helmet, leather chaps, leather gauntlet gloves, full-faced helmet, full leather jacket with pads, and hit the road.

The entire way down, I fought the biting cold wind.  My fingers were feeling pretty numb, and I had to stop twice along the way to get the blood flowing properly to all of my extremities   I pulled into my backyard a couple hours later.  Overall, it was a very enjoyable ride.  It’s been awhile since I’ve had the bike out and it was a great getaway from all of the crap that had been going through my mind that morning.

The next day was the home opener for the Milwaukee Brewers.  I bought a 20-game pack of tickets with a few of my friends again this year and had tickets for all three games: Friday, Saturday, and Sunday against the Chicago Cubs.   We had a holiday day at work, so we all went over to Miller Park to begin tailgating right when the parking lots opened.  The Brewers did end up winning the home opener in quite the dramatic fashion with a walk-off hit by Ryan Braun in the bottom of the 9th inning with 2 outs.  I ended up selling my Saturday ticket to a friend of a friend so that I could spend Saturday and most of Sunday with my family for Easter. 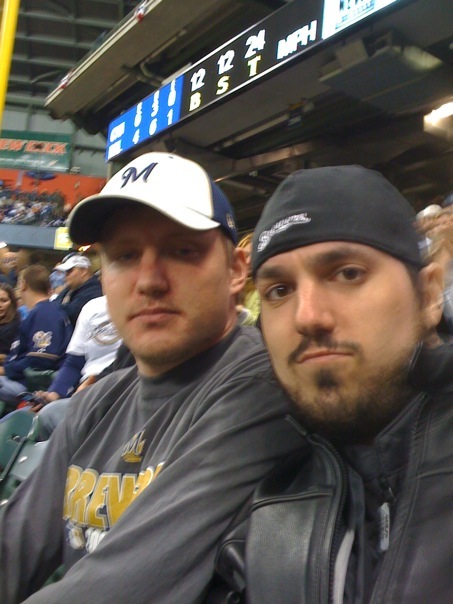 Easter was very relaxing.  I came back to Two Rivers on Friday night after the Brewer game was over.  I spent the evening hanging out with Steve, Ashley, and of course…Ava. 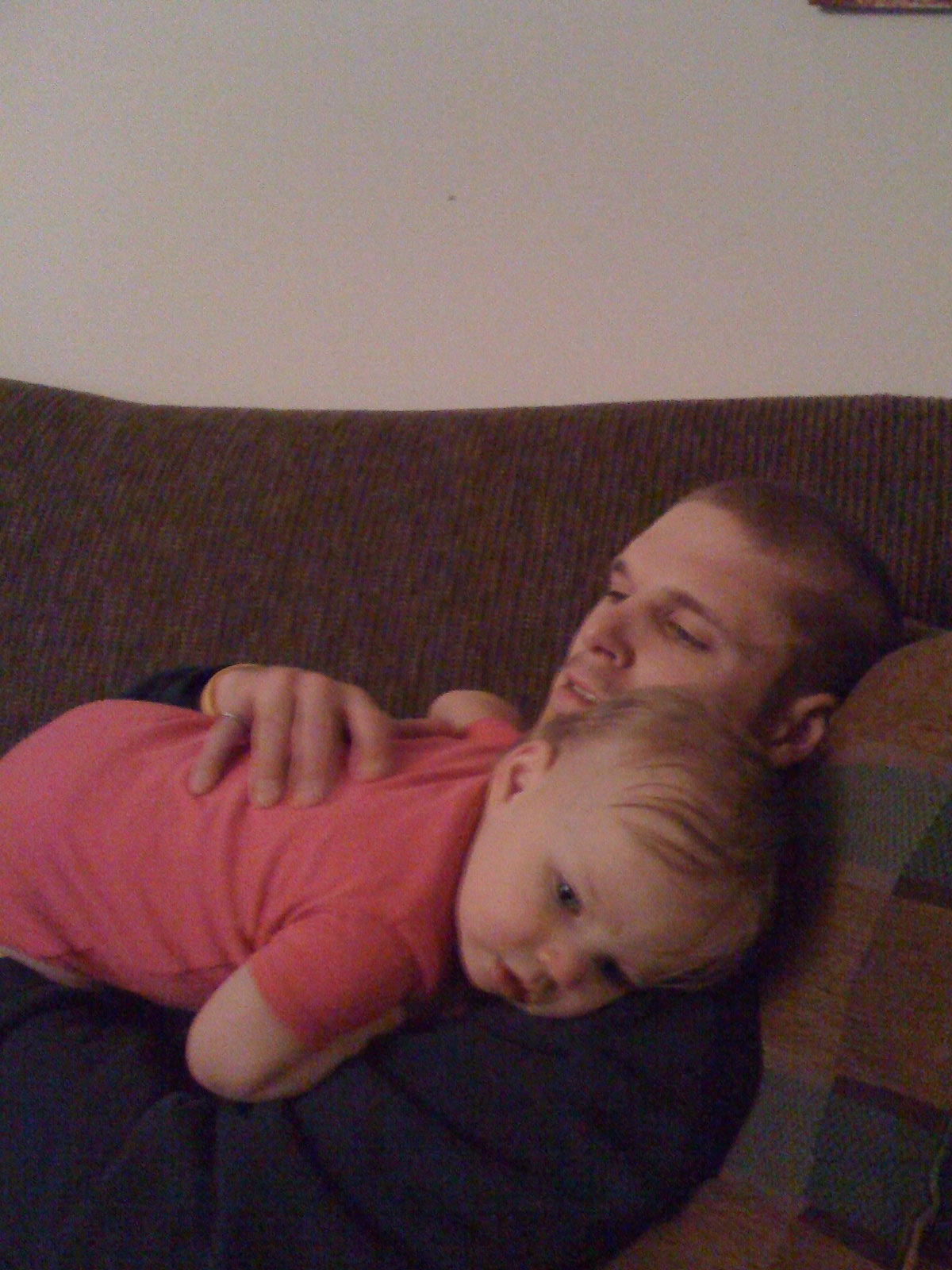 The next day, I went to Green Bay with my mom to do some shopping for Easter brunch and stuff.    After I got back, Steve invited me to go to the park with him, Ashley, and Ava….how could I possibly turn that down? 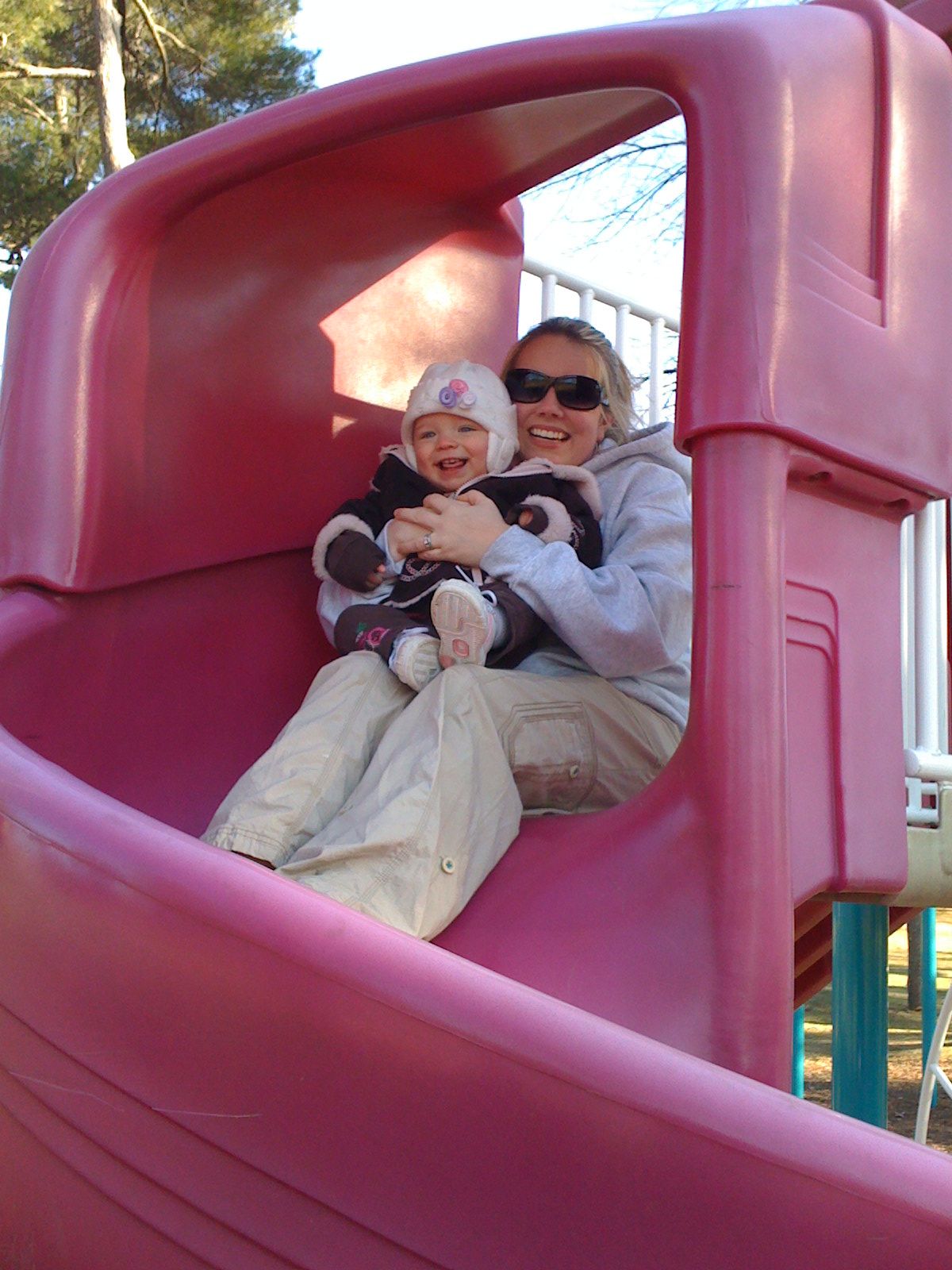 That night, we all went to Kurtz’s for dinner, as Lindsey was waitressing that night and had reservations in her section for us.  We had a good time and it was nice being with everyone.  After that, I went out to Manitowoc for the night to hang out with a friend.

Easter Sunday was a bit like Saturday…except a lot more food.  However, I had to get back down to Milwaukee as soon as I could because I had another baseball game to get to that night.  So right after I finished eating, I took one last picture and then hit the road. 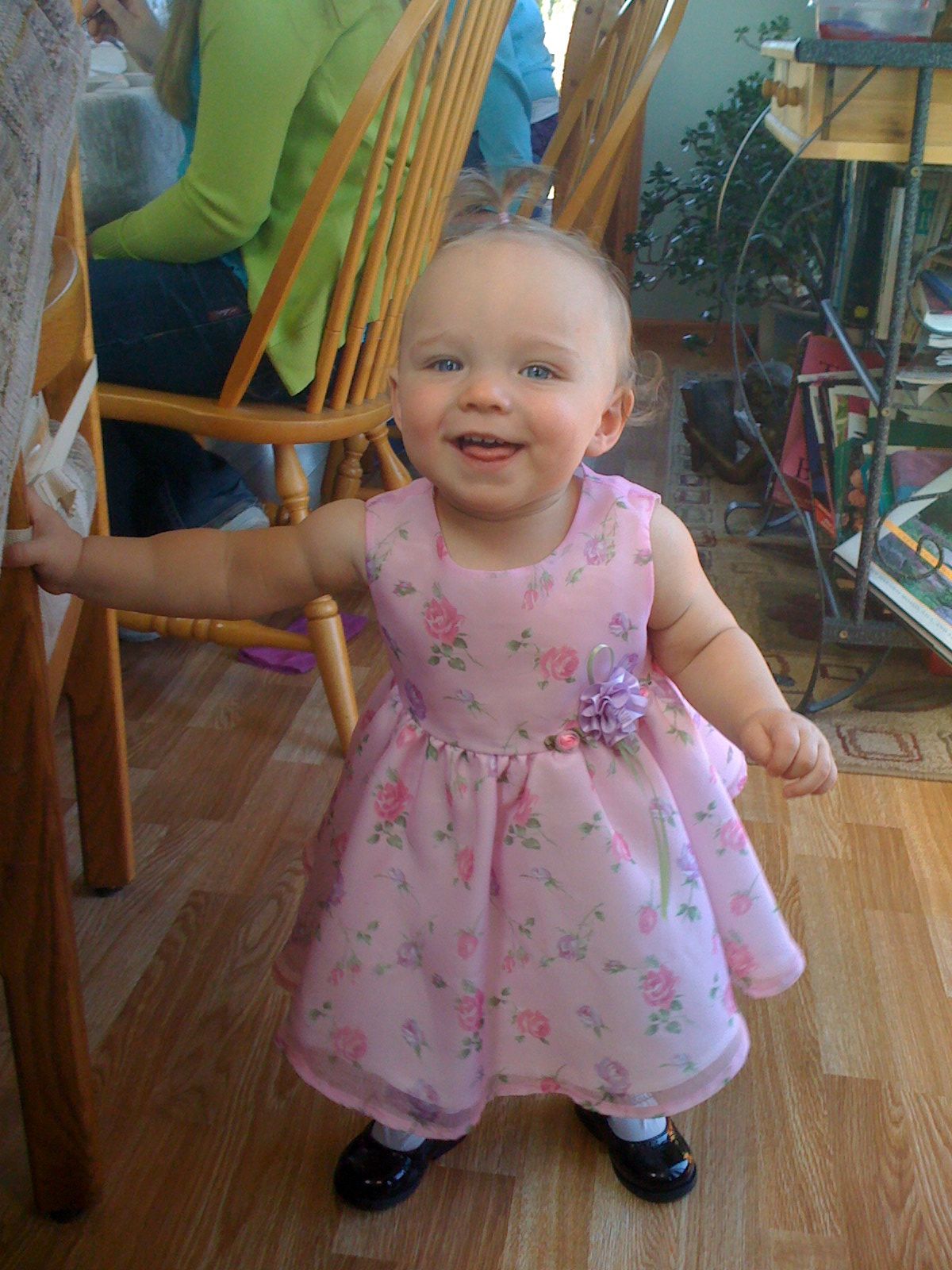 Doesn’t her arm look like a row of marshmallows?  Haha!

Oh, and about the biopsy results, don’t worry about it too much right now…as I’m trying not to.  I’ll find out more about it at my next appointment and I will write some sort of short entry that weekend detailing exactly what’s going on. 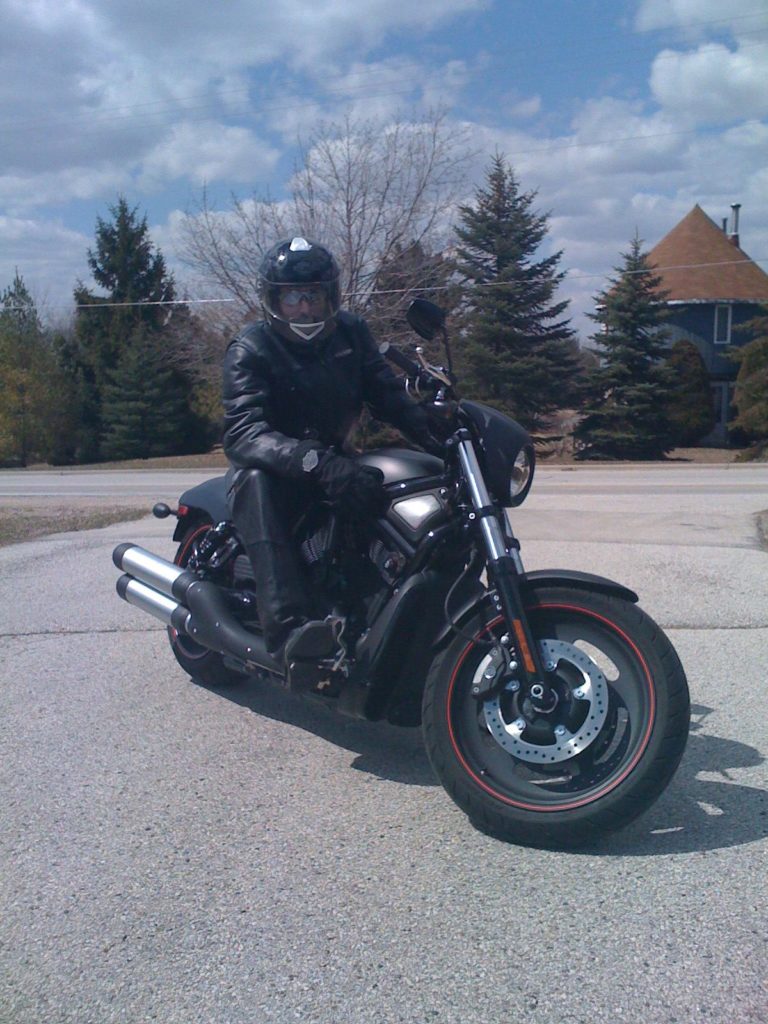