November 7, 2011 – This coming Wednesday Eric is scheduled to undergo his 3rd stem cell transplant from a matching donor found in Europe.  Eric was admitted last night into Froedtert’s BMT unit to investigate a spot found in his lungs on a CT scan performed last week.  Once that is determined to be ok, they will proceed with the procedure.  Following the allogeneic (stem cells taken from a different individual) transplant, this particular donor will cause Eric’s blood type to shift from A+ to AB+, and ideally also cause him to achieve a Graft vs. Leukemia (GvL) effect that will attack the leukemic cells through immunological rejection via the T lymphoctyes.

Prior to engraftment, Eric’s bone marrow will first need to be destroyed with chemotherapy which will leave him without an immune system for several weeks, making him very vulnerable to infection and sepsis.  He will need to be kept under close watch and avoid all contact with any diseases.  Multipotent hematopoietic stem cells will then be harvested from the donor via peripheral blood stem cells.   It remains a risky procedure with many possible complications such as secondary cancers, cataracts, organ damage, or graft versus host disease (GvHD).  GvHD can be mild, moderate or severe – even life threatening.  Symptoms may include full body rashes, blistering, nausea, cramps, loss of apetite, diarrhea, vomiting, excessive mouth/throat dryness, ulcers, jaundice, and/or gastrointestinal damage.  It has been estimated Eric’s odds are slightly in his favor that he will survive the transplant, and it remains his only current option for a cure.

Eric’s donor was determined to have a a tissue (HLA) type that matches the recipient. Matching is performed on the basis of variability at three or more loci of the HLA gene, and a perfect match at these loci is preferred. Even if there is a good match at these critical alleles, Eric will require immunosuppressive medications to mitigate graft-versus-host disease.  Eric’s previous two donors were his brother Mike and sister Lindsey, but after 4 and 1 years respectively post-transplant, both proved unsuccessful.  After 3 more relapses, it was  decided to pursue a 3rd unrelated donor which has now been found in Europe through a registry.  After the cells are harvested from the donor, they will be transported to the hospital where Eric wll receive them through an intravenous line just like a blood transfusion, and will take approximately 4-5 hours to complete.  Following the transplant, Eric will need to be kept in a quarantined environment and limit his contact with other individuals.  He will also need to receive periodic transfusions of red cells and platelets until his marrow function has been restored by the transplanted stem cells.

People who would like to be tested for a specific family member or friend without joining any of the bone marrow registry data banks may contact DKMS or Marrow.org and be tested with a mouth swab to see if they are a potential match.   A compatible donor is found by doing additional HLA-testing from the blood of potential donors. The HLA genes fall in two categories (Type I and Type II). In general, mismatches of the Type-I genes (i.e. HLA-A, HLA-B, or HLA-C) increase the risk of graft rejection. A mismatch of an HLA Type II gene (i.e. HLA-DR, or HLA-DQB1) increases the risk of graft-versus-host disease. In addition a genetic mismatch as small as a single DNA base pair is significant so perfect matches require knowledge of the exact DNA sequence of these genes for both donor and recipient. Leading transplant centers currently perform testing for all five of these HLA genes before declaring that a donor and recipient are HLA-identical.  Race and ethnicity are known to play a major role in donor recruitment drives, as members of the same ethnic group are more likely to have matching genes, including the genes for HLA. 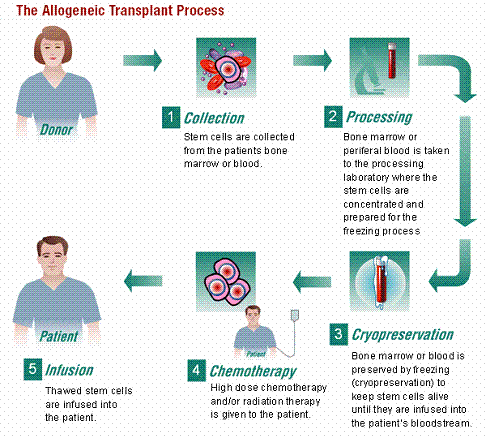