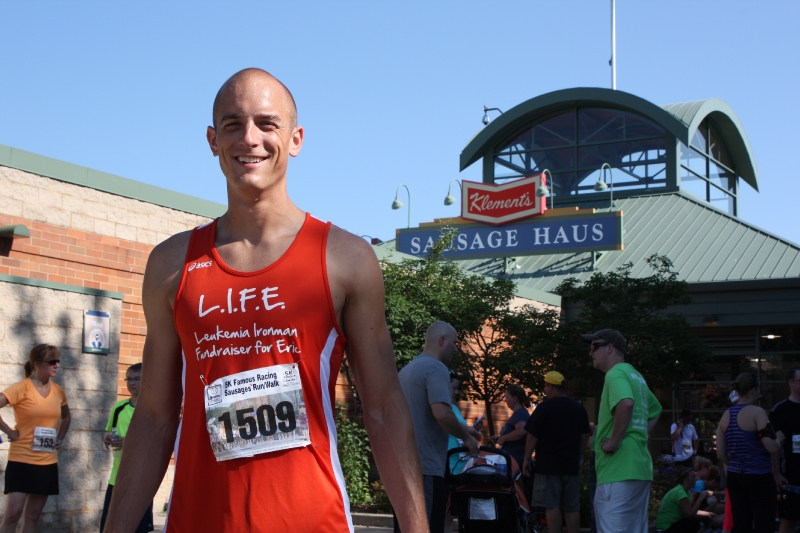 Meet Ryan Igielski – a Waukesha, WI native who used to work with Eric at Harley-Davidson.  Ryan contacted us back in June of this year to see how he could become apart of Team LIFE.  In his words “I worked on the same team with Eric at H-D so L.I.F.E. has always been very near and dear to my heart. I enjoy running and get a couple half marathons in per year along with a few other races. I ran the Madison Half over Memorial Day weekend and saw a Give to Life shirt out there and it gave me the idea to check into the idea/possibility of being able to run for a purpose. I’ve mostly just done running for my own personal enjoyment, but I’d love to represent a good cause along the way if I had the chance.”  Ryan has set a personal goal of raising $5,000 for L.I.F.E. by the time he reaches his last race on November 2nd.  Since that day he’s made considerable progress towards that goal, and has raced in a 5k, a 5 miler, and a half marathon.  This Sunday October 6th he will be competing in the 33rd Annual Milwaukee Lakefront Marathon.  For anyone in the Milwaukee area possibly wanting to cheer Ryan on – the race will start at 7:30am at Grafton High School and will head south along the lakeshore towards downtown Milwaukee and back.