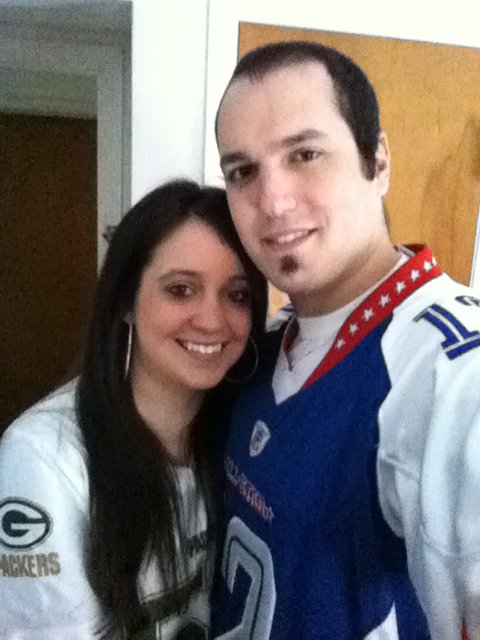 This week has been a pretty eventful week.  On Sunday, we were all blessed with the incredible performance of the Green Bay Packers.  It’s been one of my dreams to see the Packers win the Super Bowl again.  The last time that I saw them win it, I was only like 12 or 13 years old.  We had a bunch of friends over at our house and enjoyed all kinds of great food and beverage.  Go Pack!

The following day wasn’t quite as joyous as the day before.  The day started off with me going into work.  During one of our weekly meetings, I actually had to step out and excuse myself, because I was feeling quite sick.  I had a little bit of a pukey episode in the bathroom, cleaned up, and returned to the meeting.  By the end of the day, I was feeling pretty exhausted.  I could tell something wasn’t quite right.

My brother, Mike, was in town because he had some things he needed to take care of in Wisconsin.  He was using my house as a basecamp until he was able to square all of the stuff he needed to get done.  Anyway, as the day and night progressed (Monday night), I grew more and more tired.  Finally, I decided to go lie down and take a bit of a nap before the new season of Top Gear (BBC Version) began at 9:30.    As I walked into my bedroom, my hip, the one that has advanced avascular necrosis present, skyrocketed in pain.  Just as that happened, my entire body was flooded with chills.  All of the muscles in my body ceased up and I collapsed on my bed.  My neck muscles were so tight that it felt like my neck was going to snap.  I couldn’t control anything.  My friend Jason and my brother Mike, who were still watching television in the living room, heard some commotion and knew something was up.  I tried my hardest to get myself to my feet and start making my way to the bathroom.  I felt stiff as a board as I bumbled my way through the house.  By the time I reached the bathroom, Mike and Jason were at my side freaking out, not knowing what the heck was going on.  I could barely talk as my muscles were all still going crazy.  I had some of the most intense chills I have ever had before.  I was so cold.  I stood there looking into the mirror for about 10 minutes until I could regain some of my composure where I could function on somewhat of a normal level.

By this time, Mike and Jason were clamoring for me to get in the car to go to the hospital.  I wasn’t at that stage of concern quite yet.  I hopped in the shower and cranked up the heat.  I needed something warm and relaxing to help calm me down.  My heart rate was extremely elevated and my breathing pattern was short and fast.  I dried off and threw myself into my bed to try and sleep it off until the morning.  The last thing I wanted to do was go to the Froedtert emergency room.  I’ve had some of the worst experiences at that emergency room before and I wanted to wait until morning to see what the doctors would have to say.  I made some calls to my fiancée, Cari, requesting that she try to get the phone number for the bone marrow transplant unit.  The unit would have the on-call doctors right there able to instruct me on what I should do.  She called my mom who then called the unit.  Within minutes, the unit was on the phone with me, telling me to get my ass to the emergency room.

So I did.  My brother, Mike, helped me pack some of my belongings and we headed over to the emergency room.  Cari was already driving down from Manitowoc to be there with me and would arrive shortly.  I had my blood drawn, vitals taken, and some x-rays done.  My temperature was 103.0, my heart rate was like 135+, and my pulse ox was down to like 90.  It was now about midnight and Cari had arrived.  Mike, who had come to the hospital with me, said his good byes and went back home.  Within an hour or so, I was admitted to the hematology/oncology unit.

It is now Friday, and I have been here a total of four days and will most likely be here for the rest of the weekend.    To make a long story short, I have a serious case of pneumonia.  My fevers have been going up and down pretty constantly over the course of the entire week.  They have been throwing all kinds of antibiotics into my to try to control the infection.  I’ve now had probably half of a dozen chest x-rays and CT scans trying to determine whether the pneumonia is growing or shrinking.   In addition to that, they performed a bronchoscopy.

Before I go on, I have to describe this bronchoscopy operation.  It was an unforgettable experience.  The night before the procedure, the operation team came into my room to talk to me about what they would be doing and why they needed to do it.  I guess the best way to describe what they do is to go through it step by step.

The next morning they took me to the procedure room to begin.  They started off by giving me one of those breathing apparatuses where they put in some type of fluid that turns to gas as you breathe in and out.  The fluid/gas was a numbing agent that would help numb my throat for the procedure.  It tasted absolutely terrible and I did that for about five minutes.

After that, they brought me over to the operating table where I laid down to prepare for the next step.  One of the assistants hands me a spit tray while another shows me a device that he is going to shove down my throat.   This plastic thing was probably seven or eight inches long and about half of an inch in diameter.  He instructs me to lay back and try to be as calm as possible.  Before I know it, he plunges the device all the way down my throat and starts pumping this lime green slime numbing agent all over.  I begin to gag like crazy, feeling like I was drowning in someone’s diarrhea.  A few seconds later he withdraws the device and tells me to spit any of the excess slime into the spit tray.  I look him in the face and tell him that that was one of the worst experiences of my life.  He looks back at me and tells me that we are going to do it two more times!  …shit.

After they finish up numbing my entire damn upper torso, they start giving me some conscious sedation drugs (verced and fentanyl).  These two drugs I have become VERY familiar with because I get them every time that I have a bone marrow biopsy.  Anyway, they tell me that after they give me these drugs, that I won’t remember a single thing…not even the green slime incident.  I tell them that they better give me a horse dose of that stuff because I am a mule when it comes to reacting to normal dosages of sedatives.  Ignoring my advice, they give me standard quantities of verced and fentanyl.  Throughout the procedure I can feel the snakelike apparatus going down into my lungs and everything.  I kept giving them hand signals to give me more drugs but apparently thumbs up from the patient means that everything is okay.  I, of course, wasn’t able to say a single word.  I remember even trying to spell out in the air with my finger the word FENTANYL.  Oh well…what’s done is done and it’s not like I can go back now and do it over differently again.

The purpose of the bronchoscopy is to rinse out the infected lung with a clean saline solution and extract the solution with a hose.  Once the fluid has been retrieve, they can put it under a microscope to see what kind of bacteria and infection I have growing there.

Over the next few days, I kept getting more antibiotics and chest scans.  It is now Friday and I haven’t had a fever since Thursday morning at 3:00am.  I was initially told that I had to go 24 hours without fever to be able to get out of the hospital.  This was perfect ,as my Goddaughter, Ava’s, birthday party is tomorrow (Saturday).  However, this was not going to happen.  Just a short while ago, my new primary oncologist, Dr. Hari, informed me that I have to go 72 hours without fever before they will let me go home.  He said that this severe case of pneumonia that I have has a 50% mortality rate.  Once he said that, I started taking this whole thing much more seriously.  What kind of shit would it be that after surviving cancer three separate times over the last eight years that I would kick the bucket from a lung infection!  Depressingly, I accepted what Dr. Hari was telling me that I would be stuck in the hospital for the remainder of the weekend, thus missing Ava’s party.

Anyway, it looks like I am on the tail end of this infection and back on the upswing.   I have a biopsy scheduled in the very near future with a tentative date for my first day of chemotherapy on Thursday, February 24th.  I only say tentative because we need to wait for the results from the biopsy first.

Thank you all for being there for me and my family!  I read each and every one of your cards, letters, and emails.  The support has been absolutely incredible.  Even though I will be actively receiving chemotherapy treatment on the day of my benefit on the 26th at the Lighthouse Inn in Two Rivers, I will do everything in my power to make it there.