How did you learn about the Janus Charity Challenge?
I first learned about the Janus Charity Challenge in 2003 during my second Ironman Wisconsin.  That year I had raised over $12,000 for the Leukemia and Lymphoma Society, without knowing anything about Janus Charity Challenge.  Because I was the first “Team in Training” member to ever fundraise for an Ironman distance race, there weren’t any programs set up for someone like me.  I was just 20 years old, and all on my own as far as fundraising and training, all while watching my little brother fight for his life.  Monday after the race came when awards were being given out, and I saw all of the other individuals get to go up on stage while I sat in the audience.  It was heart wrenching, because I knew I belonged up there sharing Eric’s story with the world.  But when I saw the other athletes up there sharing their own personal stories, it was then I knew I wasn’t alone.  It was a very touching experience.  I knew they all were out there training and fundraising for the same reasons I was, and it was wonderful to see them succeed in their endeavors.  5 years later in 2008 when Eric relapsed for the first time, I raced it again for charity, this time raising over $16,000 for the Leukemia and Lymphoma Society.  But again I found myself struggling to register for the Charity Challenge.  A 501(c)(3) letter was needed, and LLS was difficult to communicate with.  It wasn’t until right after I registered for the Ironman Wisconsin 2010, that a separate non-profit organization was formed in honor of my brother this past year.  This made it very easy to register for the Charity Challenge, and I seriously couldn’t be more motivated!

What is your most compelling goal for your Ironman race?
My most compelling goal for this Ironman race is to cross the finish line and be able to hug my brother Eric.  He has been fighting Acute Myelogenous Leukemia since 2003.  I was the original stem cell donor immediately following my efforts at the Ironman Wisconsin that year.  He relapsed in 2008, and then again last summer in which was given a terminal prognosis.  We were told there wasn’t much time left, maybe a couple of months, and everyone was sure he would be gone by August 2009.   I felt so absolutely helpless, so I set out to help in the ways I know best.  In the years previous, I had raced in 4 Ironman Wisconsins which were dedicated to fundraising money for research for a cure in his honor.  We called it L.I.F.E. (Leukemia Ironman Fundraiser for Eric).  It was the only thing I knew how to do.  We’ve been on statewide television (videos available for viewing at www.givetolife.org), on the front page of every major newspaper in the state, and we’ve raised over $40,000 for the Leukemia and Lymphoma Society.  But now it was happening to him all over again.  I wanted to register for the Ironman again last year to try and do my part, but my family thought it would be best if I put it off, and spend as much time with him as possible.  So while he was still able, we quickly set out to accomplish his bucket list: skydiving, gambling in Vegas, driving race cars, you name it!

While visiting him at the hospital one day, when he was at his absolute worst and just weeks away from what his doctors predicted would be his last, he told me that I should register for the Ironman Wisconsin 2010.  He promised me that he would be there to watch.  My eyes welled up with tears, I wanted to believe him so badly.  His pale face, bald head, and frail body told me that wasn’t going to be possible – but the determination in his eyes told me otherwise.  I’ve never seen more courage and strength in anyone my entire life.  At one point, he was given less than a 1% chance to live.  His will to fight, his will to survive, that’s where I draw my strength from.  My little brother is my hero.  Since that day a miracle has happened.  To the amazement of all of his doctors, he has managed to turn his condition around.  He is now in remission, he just had another bone marrow biopsy last week, and we pray that it will come back clean.  In the meantime, last fall we turned L.I.F.E. into an official 501(c)(3) non-profit organization and began what is called Team L.I.F.E.  There are now 25 athletes on the team that race for the fight against cancer.  Eric’s story of survival is very powerful, he has given hope to many.  It is our goal that through fundraisers and drawing awareness, we can have a large positive impact in our own communities.   Our goals are to be able to provide emergency funds to families of local children with cancer who need to help with transportation and other basic living expenses, giving pre-paid gas  and phone cards to families who must travel long distances for their child’s treatments, or even helping someone like Eric accomplish their own person bucket list.

I have been training harder than I ever have.  I lost over 25 pounds this year, and I am going to be prepared to race this year’s Ironman Wisconsin harder than ever before.  I have the support of Team L.I.F.E. around me, and free coaching donated by local professional Trek triathlete Blake Becker.   Go Eric!  Team L.I.F.E.!

What is your motivation for participating in the Janus Charity Challenge?
After Eric promised me last summer that he’d be there this year to watch me if I ran in the Ironman Wisconsin, I have had all the motivation one could ever need.  His strength and heart are a real inspiration for anyone.  He is believed to be the only person on planet to have lived with AML after 7 years, 2 stem cell transplants, and 2 relapses.  If he can make it through all of that, Ironman should be a piece of CAKE!

What or whom, specifically, does your charity benefit?
I am raising money for L.I.F.E. – The Leukemia Ironman Fundraiser for Eric.  It is a non-profit organization that raises money for cancer survivorship and research.  Our goals are to be able to provide emergency funds to families of local children with cancer who need to help with transportation and other basic living expenses, giving pre-paid gas  and phone cards to families who must travel long distances for their child’s treatments, or helping someone like Eric accomplish their own person bucket list.

Why did you select your particular charity?
I selected it because not only does it honor my brother, it is the only one I am aware of in which 100% of the funds are donated towards cancer survivorship.  It is completely run by volunteers, and all of the money will go towards helping real people.  Helping out all of those other families affected by cancer is going to feel amazing, and I think that is going to send a very positive message.

What is your fundraising goal in terms of fundraising dollars, and what do you hope your contribution will accomplish?
This year I set out to raise a minimum of $50,000.  To date we are still shy of $10,000, but a lot of my time has been spent building the organization towards a much bigger future: recruiting for Team L.I.F.E., publishing the website, organizing volunteer events, and filling out all of the necessary paperwork.  The LiveSTRONG organization is also currently helping us search for the family with a child affected by cancer that needs our fundraised money the most.  With it we will be able to help them purchase gas cards for traveling to and from treatments, pre-paid phone cards, scholarships, or even helping out someone in a situation such as my brother Eric check off the items on his/her bucket list.

What is your fundraising strategy? Who all is involved in your fundraising efforts? Is your spouse partnering with you?
This year I created a new triathlon/running/cycling team of over 25 people.  I designed and ordered uniforms for all them, and together we train, race, and fundraise for the cause.  We have been on several television channels and in many newspapers.  Many friends, family, and coworkers have helped to contribute.  This summer I also organized an aid station for L.I.F.E. at the 2010 Capitol View Triathlon in Madison, WI that brought in a bit of money.  My fiancee is a member of Team L.I.F.E., but will be spectating at the Ironman. 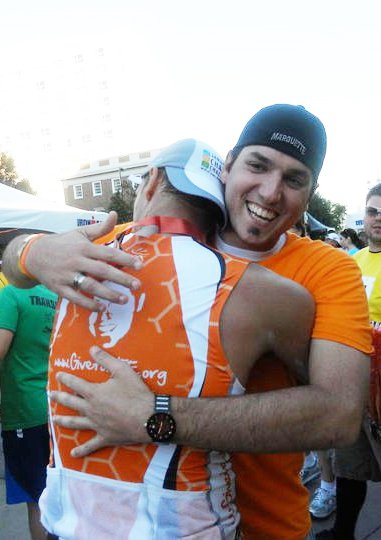