McLean of Two Rivers fights on against leukemia

Hopes next transplant will be long-term cure 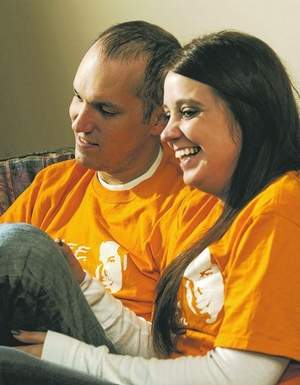 November 8, 2011 – Thank you to Charlie Mathews for writing such a nice article about Eric in the Herald Times Reporter on Tuesday November 8, 2011.  If you would like to read it, please click here!

Also a quick update – sorry there is no video blog today.  Froedtert actually sent Eric home to Two Rivers because there were some complications with the donor, which is unfortunate.  However, it appears everything is going to be okay and the transplant will simply be one day late.  There is no reason for him to be there until the transplant is ready as test results show his lungs are clear of infection, which is great news!

TWO RIVERS — Eric McLean, 27, just wants his long battle with cancer to be over.

He actually wants to be in a bed at Froedtert Hospital in Milwaukee on Thanksgiving weekend, Christmas if necessary, hopefully making a full and lasting recovery from another stem cell transplant.

“A year from now, I’d love to be working, cooking dinner, mowing the lawn, shoveling, making popcorn and watching a movie,” said McLean, who was originally diagnosed with acute myelogenous leukemia in June 2003.

After five relapses and two failed transplants for his cancer, the newlywed may or may not get that chance.

A Friday interview with McLean, his bride of four months, Cari Lynn Jaeger, his parents and sister, was interrupted by a call from Froedtert’s bone marrow transplant program coordinator.

“Why do you always have to give me bad news?” McLean said, as he started tearing up. “Maybe they got the CT scan wrong … triple check … make sure it’s my name on it.”

After hanging up, McLean said Froedtert’s medical staff wanted to do a bronchoscopy Monday and get a cell sample from his lungs that looked suspicious on the CT scan.

“So, my transplant could be pushed off a day … a week, who knows,” McLean said of the potentially life-saving procedure that had been set for Nov. 16. “Everything just shifts until I can get 100 percent healthy.”

Another setback, as McLean fights on despite his oncologist not having a check box on the medical history form to indicate, “5th Relapse.”

This third transplant will come from an unrelated donor in the Be The Match national registry.

McLean said he actually thought he was experiencing a relapse while honeymooning in Jamaica with Cari, who he met through mutual friends in the local Peter Quince Performing Company.

“We started dating and he relapsed a third time,” said Cari, 27, a Lincoln High School graduate who is the owner-dancer-choreographer for Cari Lynn’s MantyDance, where there will be a Saturday fundraiser for McLean.

That third relapse followed a stem cell transplant from Eric’s older brother, Mike, and another one from his younger sister, Lindsey, nearly five years after the first one that was thought to be a lifesaver but wasn’t.

“Eric is an inspiration to a lot of people,” said his mother, Mary. “He says, ‘Don’t worry until you see me worry.'”

“Eric has never been one to quit through all of this,” said his father, Brian. “If they have something with the potential to help him, he’ll do it. He wants to stay in the game. He’s not fighting this quietly.”

“Nine times out of 10 it seems Eric is the one comforting us,” Lindsey said. “He assures us he is going to beat this …

“You find yourself complaining a lot less … not whining about a cold, a (college) paper coming up or gas prices,” Lindsey said.

Eric said he’s not always upbeat and has his tough moments. The Friday phone call asking him to come to Froedtert three days earlier than planned was jarring.

But his 8-year battle with cancer has taught him that, “I can handle it. Statistically, one in 300 in a given year will get leukemia. I’d rather be the one than a 5-year-old.”

McLean is grateful to Harley-Davidson for sticking by him the past three years, including not withdrawing a job offer after he relapsed in December 2007 following graduation from University of Wisconsin-Whitewater in computer management systems.

If the transplant goes forward and all goes well, McLean said he should have the energy to return to his Internet duties at the Milwaukee motorcycle manufacturer in about six months.

President of the Washington High School Class of 2002, Eric and Cari hope to be move into their Port Washington home before year-end.

Eric would have a 35-minute commute to Harley-Davidson and Cari about 45 minutes to her Clarkbridge Hall dance studio from the home they bought out of foreclosure and have been doing rehabilitation projects.

“If Batman had a bike it would be my 2008 Night Rod Special,” Eric said of his Harley motorcycle purchased with his employee discount.

McLean has created a “bucket list” and has checked off several adventures and experiences including skydiving, throwing out the first pitch at a Milwaukee Brewers game, driving on a NASCAR track and meeting Green Bay Packers at receiver Greg Jennings celebrity golf tournament.

He said he’d still like to scuba dive Australia’s Great Barrier Reef and go to Italy and Greece for the classical architecture.

“I’d like to surf … as a snowboarder, I think I’d be pretty good,” Eric said.

If he gets an OK from his doctors, he’d like to fly as a passenger in a fighter jet “and pull as many G forces as possible.”

He said he’s not putting children on his bucket list. McLean said he knows a son or daughter would be well looked after. But he would much prefer that his cancer battle ends successfully with long-term remission, and then he and Cari raise children together.

That is several years down the road.

First up is possibly taking anti-fungal or anti-bacterial medications to clear up any physical problems delaying the transplant.