Eric's Journal, Team L.I.F.E.
14 years ago
Previous Post
Eric on NBC15 before the IMWI 2008
Next Post
Beating the Demon

It’s finished!  Well, at least my brother is with the Ironman this year.  Mike finished the race in under 12 hours…successfully accomplishing his goal with a total time of 11:46:04.  It was a very long day, but I enjoyed every minute of it.  We did our best at driving all over the course to try and intercept Mike as many times possible on the bike.  Once he started the run, we were moving back and forth getting glimpses of him as he’d run by.

The following is a picture of the 2500 or so triathletes all beginning the swim.  It looked like a school of fish or something.  Pretty incredible. 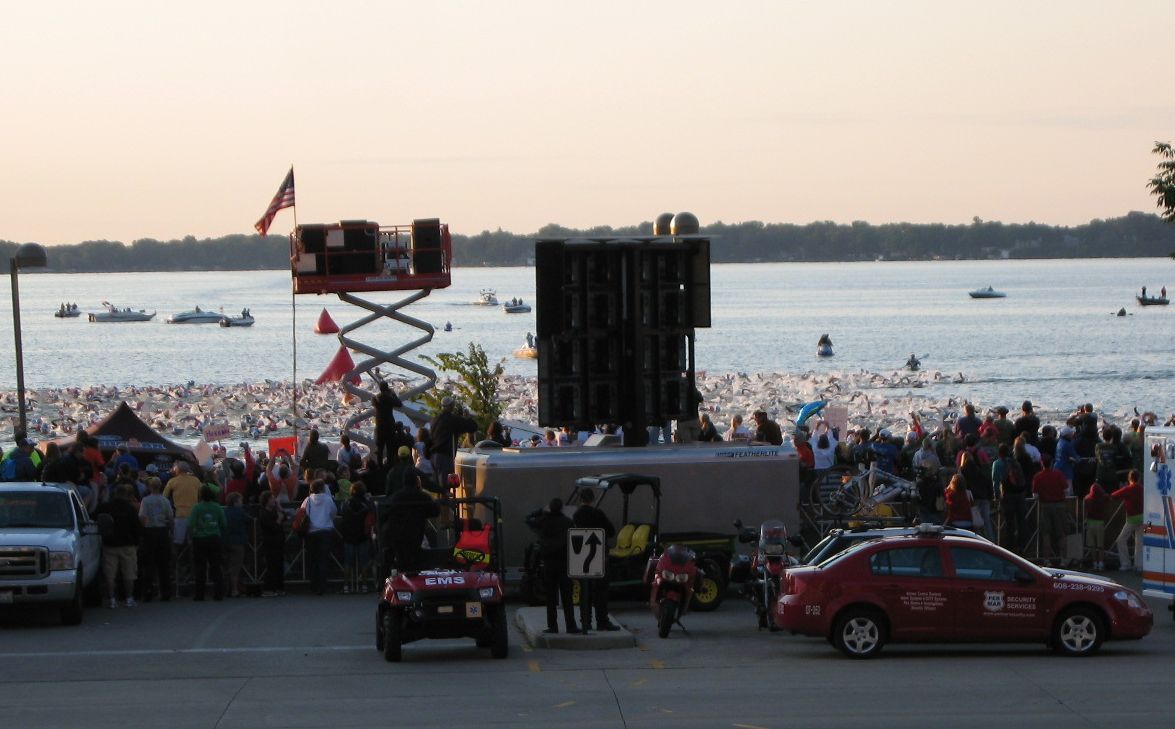 Despite his strong desire to finish in under 12 hours, he still stopped to talk to us for a minute or two here and there.

Here is a breakdown of all of his times over the years.  Click on it to zoom in if you need to.

As you can see from the above times, Mike posted some of his fastest splits in all of the categories.  The T1 and T2 are his transition times in between the swim-to-bike and the bike-to-run.

Here’s just a few pictures I took that day. 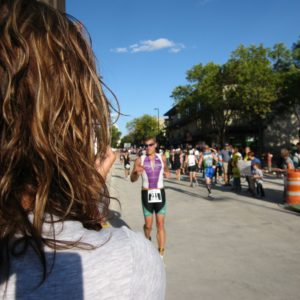 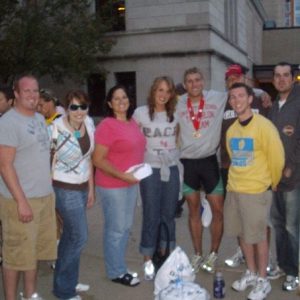 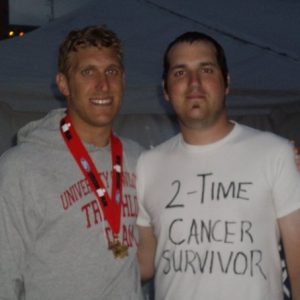 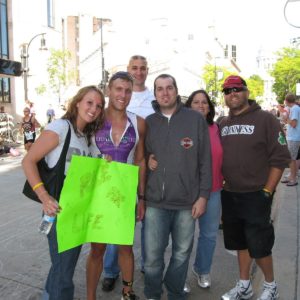 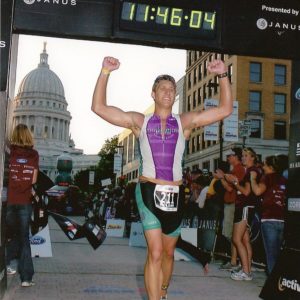 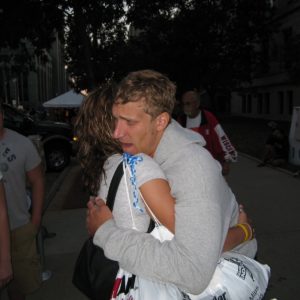 Congratulations, Mike!  We are all very proud of you!  If you’d like to send Mike a little note or something, I’m sure he’d love that – his email address is mbmclean@uwalumni.com

In other news, last Friday I went to Madison for an interview with NBC15.  It was my first time riding that way with my bike.  I-94 was a very uncomfortable ride!  There were these speed bump type things every 100 yards or so.  That combined with the wind and cold that early afternoon made for somewhat of a lousy ride.  Anyways, NBC interviewed Mike and I again about my fight with leukemia, our efforts in raising awareness for cancer, raising money for The Leukemia and Lymphoma Society, and Mike training and competing in this years Ironman.  Although I haven’t gotten to see the interview yet, I hear it turned out well.  Once I get a copy of the video, I’ll post it on the website.

After the interview, Mike and I grabbed some lunch and then I headed out to Whitewater.  I finally had a night on the weekend available to do something, so I went straight to Whitewater from Madison for a long night of mischief.   Without going into too much detail, I met back up with a whole bunch of old friends, drank a whole lot of beer, and reminisced about my years with my friends in school.  The next day I went to the men’s rugby game to watch the team that I used to play on.  It was pretty weird seeing one of my old teammates coaching the opposition (Marquette).  Needless to say, Whitewater won the match.  Every year it seems they get better and better.  I wish I had been more healthy through college so I could have played more years with the team.  It seemed like every other season, I had to sit on the sidelines due to extreme fatigue.  Either that or I was in a hospital bed.

Overall, I had an awesome weekend and topped it all off with an amazing performance in the Ironman Wisconsin triathlon by my older brother, Mike.

As for L.I.F.E…I see no reason in stopping our efforts in raising awareness for cancer and money for research just because the Ironman is over and I am in remission.  I’ll continue to advocate for cancer patients all over the world in whatever ways I can.  The NBC reporter asked me if I also competed in triathlons and even more specifically, the Ironman.  I chuckled and responded, “Hah no…those guys are absolutely insane!  But who knows…maybe someday.”  So we’ll see…I’m pondering over the possibility of starting to workout again and get back in shape.  Maybe even train with the help of Mike for a small triathlon next spring?  I guess I should pull back on that whole beer thing from this past weekend – but it’s so delicious!  Yeah, definitely not going to be able to quit drinking beer.  🙂

Take care everyone and have a wonderful week! 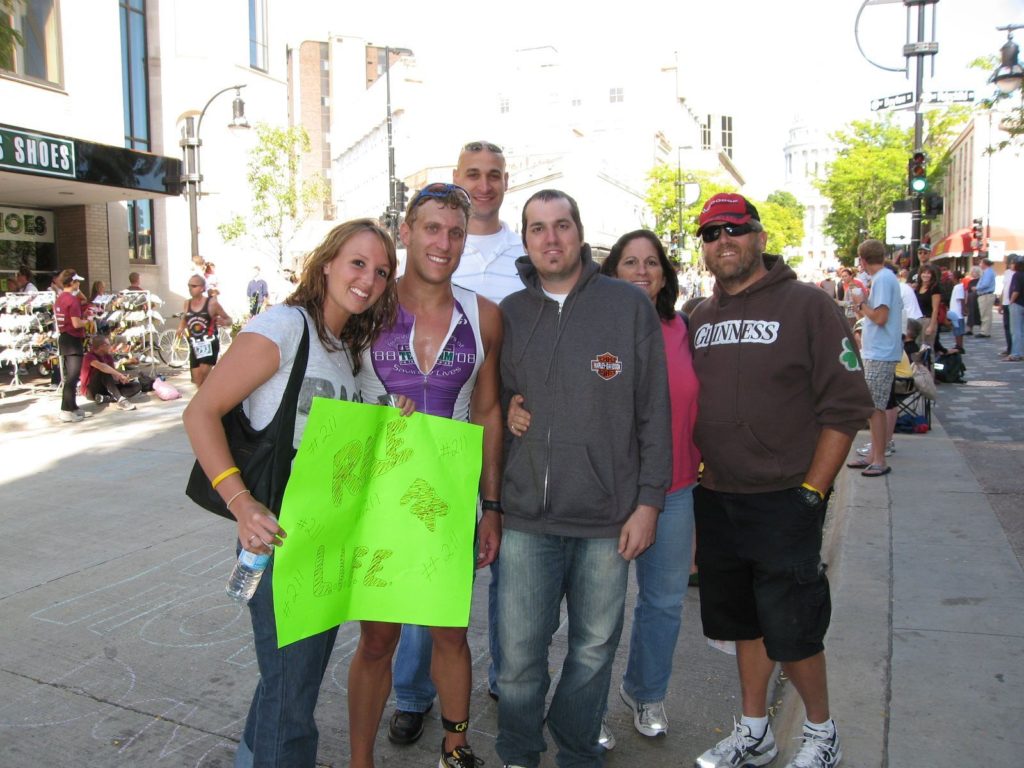