Ironman in less than one week

It’s been awhile since I last wrote and I apologize for that.  The truth is, I’ve been extremely busy.  But before I get into anything with myself, I’d first like to talk about the Ironman triathlon coming up.

It’s finally here and my older brother Mike has been training long and hard for this day.   He has been running and biking every day for the past 6 months or so in preparation for the event.   Swimming two hours or so a week, biking anywhere from 100-250 miles a week, and running 30-45 miles a week are a large part of his lifestyle.   In August alone, he’s already participated in three races.  He raced in the Alphorn Man triathlon in New Glarus getting 1st overall.  A couple of weeks later, he took 5th overall in the Manitowoc Triathlon, and then just today he placed 3rd in a 5k run.  For those of you who are unfamiliar with the event, the Ford Ironman Wisconsin events consist of a 2.4 mile swim, 112 mile bike, and a 26.2 mile run.  That means that after you’ve completed a two and half mile swim and over one hundred miles on a bike…you still have to run a damn marathon!  And Mike is aiming to complete all of this in under twelve hours.  He’s been injured for awhile, having to have surgery last year to replace a ligament in his knee with a piece of his hamstring.  He’s had to deal with a lot of pain and tightness in his hamstring and knee lately, but he’s been gutting through it.   He’s practically bionic, also having his ankle and shoulder reconstructed.

In 2006, I jumped over the barricade when my brother was finishing the event and crossed the finish line with him.

The triathlon itself is going to be on Sunday, September 7th.  The racers will all jump into Lake Monona at 7:00am at the Monona Terrace.  From there they will jump on the bikes and bike all over the damn place.  Finally, they will put on their damn running shoes and run until they can’t breath anymore – finishing at the capital building.  I encourage all of you to come to Madison on Sunday to cheer on Mike and all of the other competitors.  The Leukemia Ironman Fundraiser for Eric (LIFE) began in 2003 with Ironman Wisconsin.  Mike will once again race for this great cause in one week from now.   If you do plan on attending and wish to meet up with me or something on race day, feel free to email me or give me a call on my cell 920-901-0908 or mclean.eric@gmail.com.

So what have I been up to?  Well, other than that damn gall bladder which nearly killed me, things have been good!  On Wednesday, August 20th, I became the new proud owner of a Harley Davidson VRSCDX – Night Rod Special.  How the hell did I manage to afford it?  Well, thanks to my 20% Harley discount, I won’t have to make a single payment on it for a full 18 months.  And then after 12 months, I’m allowed to sell it.  What every other Harley employee I’ve spoken to does, is every year they trade in the bike that they bought the year before, thus getting a brand new Harley, a new 2 year factory warranty, and another 20% discount check written out to them.  And seeing as how Harleys depreciate less than 20% each year…I can even make money doin this from year to year.  Might never have to spend one cent out of my pocket!  I think the reasoning for this is, is that Harley really wants their employees to ride.  It’s good PR and advertisement for the company.  I won’t complain.  So what does this bad boy look like?!  Well, the Night Rod Special is a true departure from any other Harley you’ve ever seen before.  It’s the anti-chrome, anti-flashy paintjob, satin finished black, bad ass, mean, growling beast of a bike.  It sports a 1250cc Revolution LIQUID COOLED V-Twin HD engine generating anywhere from 110-125 horsepower at the rear wheel!  When you combine 125 horsepower with about 600-650 lbs of machine, you get one hell of a bike.  Dont worry – I ALWAYS wear a helmet…and I think these other Harley riders that I see all over the place on a day-to-day basis w/o helmets are absolutely stupid.  I took a professional safety course over five days and had 15-20 hours of safety training on a bike before I got my license. 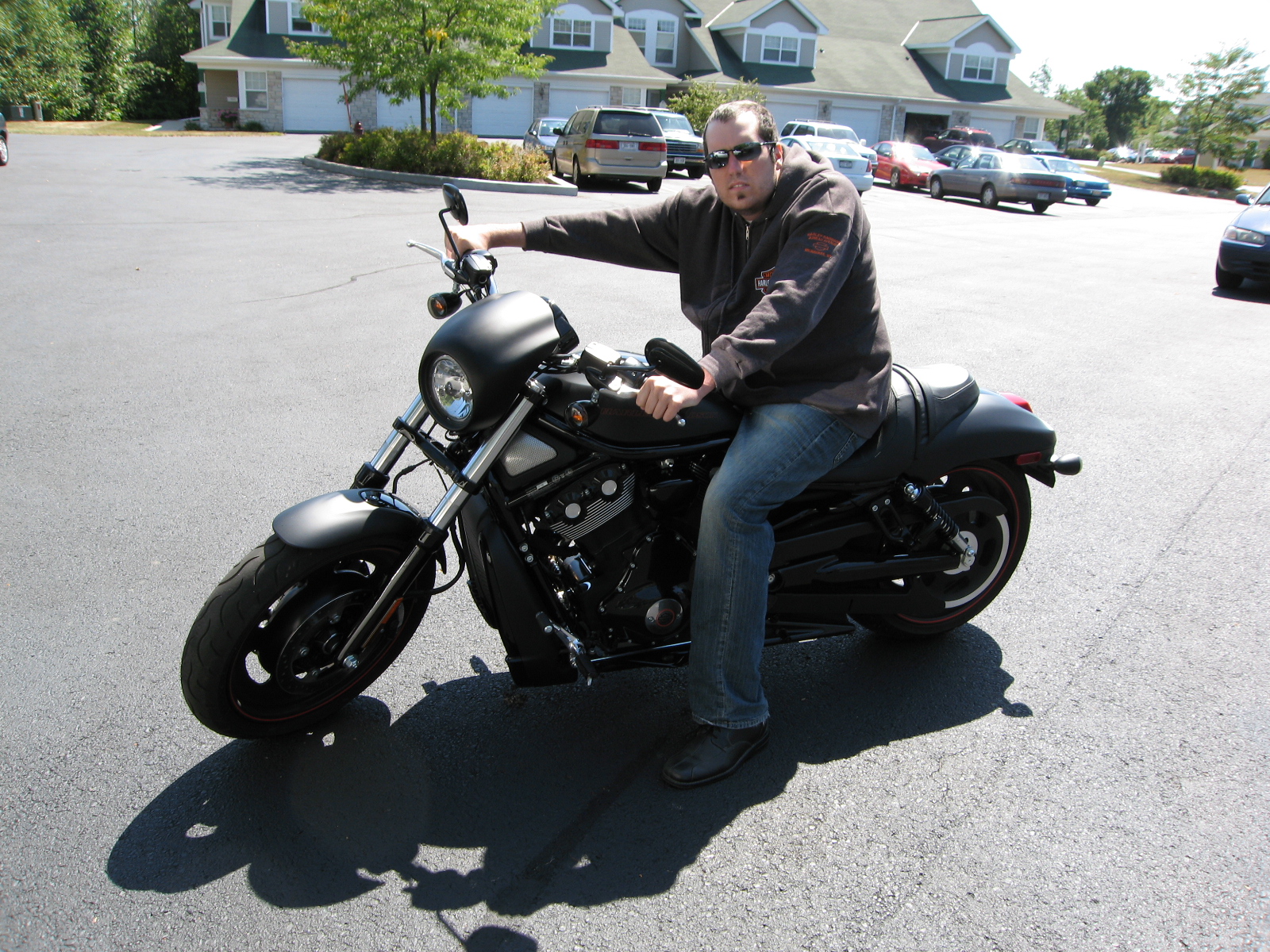 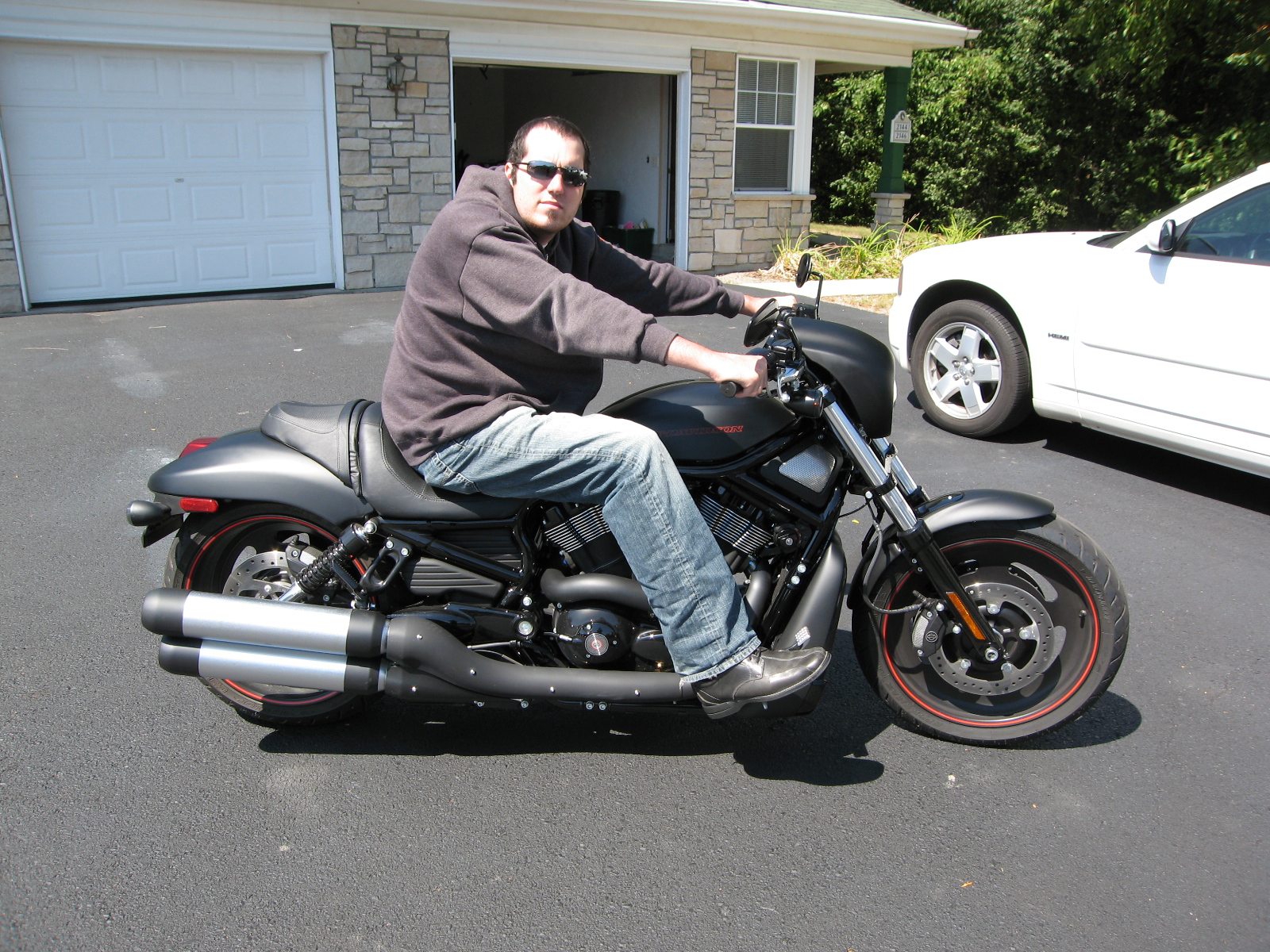 I’ve spent this entire past week busy with Harley 105th anniversary events.  From huge parties to concerts, I’ve pushed my body to the limit.  This past Friday, I think I might have pushed it a tad too far.  I spent most of the day doing stuff, clearly overexerting my unprepared body, and paid for it at the Foo Fighters concert that night.  About half way into the show, I just started blacking out.  I went to the show with a bunch of friends from Whitewater and my two best friends from high school, Nathan and Jason.  I also randomly ran into a really good friend of my younger brother Steve.  Anyways, so I started blacking out and had to sit on the lawn where I was standing.  The second I thought I was okay, I attempted to get back up again to watch the show, and instantly would totally black out again.  So I sat my ass back in that grass for the remainder of most of the show – sucking down 1-2 bottles of water.  Nathan and Jason took care of my crippled self and brought me home early.  Through it all, however, I had a great time and would do it all the same again given the opportunity.  The problem is, that now that I am somewhat “healthy” again, I want to do so much.  I want to get out there and “live life to the fullest,” but my body just isn’t ready for the kind of abuse that I’d love to put it through.  Most people, after having similar treatment that I went through, won’t resume regular physical activity for a year or more.   Well, I’ve managed to trim that timeframe down to 4-5 months.  Maybe I haven’t successfully trimmed that time down, but I sure am giving it my best effort.

For whatever reason, I’ve gotten some negative feedback on buying the bike.  Comments like, “Are you crazy?” and “How the hell are you going to be able to afford that?”…and my answer to all of these is this:  I have been through some of the worst shit you can possibly dream of.  I’ve had shit pumped into my veins that made my body feel like it was melting from the inside out.  I’ve been through more pain and agony, mentally, physically, and emotionally in the past 5 years, than most people will go through in their entire lives.  And you know what?  I think it’s about time that I enjoy life as I see fit.  If there is anything that I’ve learned throughout this entire ordeal, is that you only live once.  So I say, “Get out there and enjoy it!”  Do whatever you want that will make you happy.  That’s what really matters.  You could have all of the money in the world and be the most miserable son of a b*tch around.

I’ll close tonight with a quote from the movie Braveheart…one of my favorite movies of all time:

“Every man dies, but not every man truly lives.”

Good night everyone.  Take care and I hope to maybe see some of you this coming Sunday the 7th. 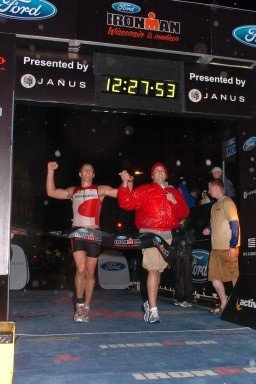