Inspiration – a letter to Eric by Josh Yach

Team LIFE members Josh Yach and Lindsay Draeger ran in the Paavo Nurmi Marathon today in Hurley, WI.  Josh wrote this letter to Eric titled “Inspiration” earlier this week and we thought it would be good to post it on the site.  Reading it was an inspiration for us, and hopefully it is for you too.  Thank you for all of the support Josh and congratulations on a strong finish.  Also today is Josh’s birthday, so from all of us Happy Birthday!

Eric, unfortunately we haven’t met yet, but at some point in the future I’m sure we will. I was introduced to your brother Mike a little over a year ago while volunteering for LIFE at the Capital View Triathlon in Madison. After meeting and talking with Mike, I checked out the LIFE website, found out a little bit about you and what you’ve been through, and made a small donation thinking it seemed like a great thing to donate to (the year before I actually raised some money for the Leukemia and Lymphoma Society through Team in Training so it wasn’t my first experience with fundraising for something).

Over the last year, I’ve kept in touch with Mike (I actually had a very similar injury to what he had when I broke my fibula last fall and he was very helpful in putting my mind at ease and giving me rehab advice) and have kept up to date on what you’ve been up to/going through. Before getting to far into this, I just want to say that I’m blown away with what you have already made it through. You’re ability and determination to keep fighting time and again is so inspiring.

When I heard that the cancer came out of remission again, and that you found out right as you got back from your honeymoon that it was back for the fifth time, I just couldn’t believe it. That just isn’t something that anyone should have to go through.

Anyway, I was home in Stevens Point last Thursday night getting ready to head up to Hurley to run the Paavo Nurmi Marathon on Saturday morning. While it was my eighth straight Paavo, going into the marathon I wasn’t overly confident based on the fact that I was feeling sort of sluggish and the fact that I hadn’t had a great base of training due to being unable to run for the longest time with my broken leg. I had noticed that you had a couple “VLOGs” as you called them, and that Cari had some blogs herself up on the LIFE website, so Thursday night I finally got around to watching/reading them. I was literally overcome with emotion just listening to and reading about what you, Cari, and your entire family was/is going through! Sitting there in my parents’ living room with tears in my eyes, I just couldn’t help but feel for you.

Fast forward to the marathon, it was going about as well as I could have asked (the weather was great, and I was feeling surprisingly well) when I hit the 20 mile mark. The problem that I didn’t want to think about was the fact that the last 4-6 miles are the ones where you hit the wall and it can get hard to just keep going. While I was listening to music and thinking about how I was feeling up until mile 22, when I got to mile 22, I looked down at my LIFE singlet that I was wearing and my thought process completely changed. I thought back to Thursday and your VLOGs. From that point on, the last four miles my mindset was completely different. I stopped thinking about the music, I stopped thinking about how I was feeling and how I was getting tired and it was probably about to start getting extremely difficult, and instead I started thinking about you and the battles you’ve had (and won) with cancer. I told myself countless times over that last four miles, if Eric can keep fighting and beating cancer, I sure as hell can run four more miles (or three more or two more as the race wore on). His battles that he has won have been so much harder than running four more miles!

With about three and a half miles to go, I saw a guy a ways in front of me (the last four miles are pretty much on a straight stretch of highway with the only thing inhibiting the view being the hills) that I figured was running the full marathon and was someone who I should try to catch (when I passed him, I realized he was a friend that was running the two person relay, but I didn’t know that initially). My thought process literally was this – I’m Eric, and that guy up there is cancer. I’m going to catch and beat that cancer. The entire time I was chasing him down, I just kept thinking that. Until just before I passed him. At that point, my mindset became – I’m Eric and I’m about to catch and beat cancer, but how bad am I going to beat it? Just like you’ve said in some of your videos, when you beat cancer again for the fifth time, some extreme measure may be needed to knock it out for good – I wanted to run away from the guy as fast as I could to get as far ahead of him as possible to have my own extreme measure to beat him.

In the end, you (I) beat the cancer (the guy I passed) by a good margin. I finished the last 10k at a pace that was faster than my average time for the whole marathon, which is unbelievable. It was quite literally the best I’ve felt at the end of a marathon (and it was my tenth marathon) and easily the fastest last 10k of a marathon that I’ve ever ran. I told people afterwards, I never hit the wall. I never let myself get tired.

I know that I have no idea what you are going through (between the pain and the effort that you have to put forward each day), but I just want you to know that you are an inspiration to me and I’m praying and pulling for you. I know you are going to beat this thing once and for all! And I’m definitely looking forward to the day in the future when I get to meet you and shake your hand.

All the best,
Josh Yach 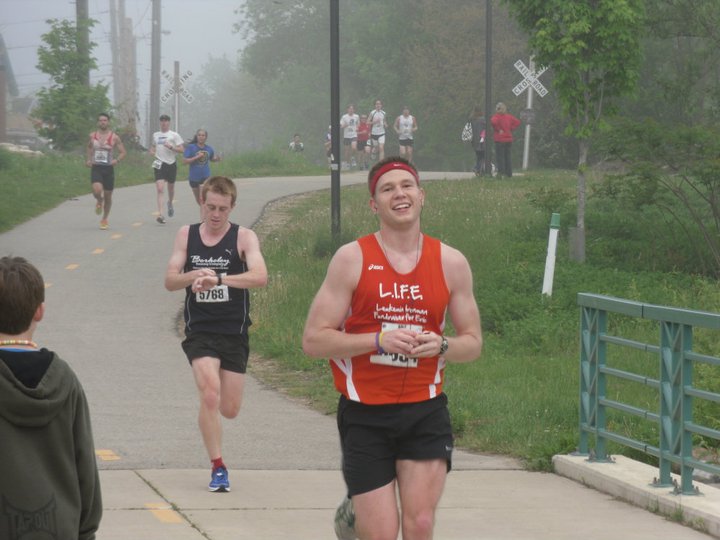