Golfing for a cause: Trio plays 100 holes to raise money for sick friend

TWO RIVERS — Three young men set out to beat a golfing record and raise money for a friend’s brother this week, and they succeeded in doing both.

Josh Laurin, 20, Erik Malach, 19, and Eddie Snyder, 21, golfed 100 holes Thursday at Eastwin Valley Golf Course, breaking the Eastwin record of 72 holes in one day.In the process, they raised almost $300 for Eric McLean, a 24-year-old Two Rivers native who recently found out his leukemia is terminal. The men are friends with McLean’s 18-year-old sister, Lindsey.

Malach said he wanted to incorporate helping someone into the attempt to beat the Eastwin record. He said he has planned fundraisers around fun events in the past. When he learned about Lindsey’s brother’s prognosis, it seemed like the “perfect opportunity to give back to a friend.”

They started golfing at 7 a.m., and by about 10 a.m. had completed 27 holes. They were averaging about 40 minutes per nine holes, but expected it to take longer as the day, and the heat, wore on.

Did they think they would surpass the record?

Snyder had another goal: “I’m hoping I don’t pass out of heat exhaustion,” he said.

Malach said his main concern was raising money for McLean. They put a bucket in the clubhouse where people could donate to the cause, and the bucket will remain there collecting donations until Monday. They also decided to donate money for their own accomplishments on the golf course: $1 for every par, $5 for every birdie, and $50 if they got a hole-in-one.

In addition, Dan Shambeau, owner of the golf course, donated $1 for every greens fee paid on Thursday. The total raised includes that amount.

“We wanted to join in also as a golf course,” said Shambeau, whose uncle, Allan Shambeau, died last week of leukemia.

Shambeau said the three men golfed until 8 p.m. Throughout the course of 100 holes, Malach took 472 swings, Snyder had 450, and Laurin had a total of 514 strokes.

McLean initially was diagnosed with acute myelogenous leukemia in 2003 and fought off the disease twice, with a bone marrow transplant each time. Early this month he learned the cancer is back, and doctors say a cure no longer is possible.

The money raised by the golf outing will “help the McLean family … spend time together and do whatever they want to do,” Laurin said .

Lindsey McLean said the family will use it “to make his dreams come true.”

McLean already has accomplished many things on his “bucket list,” according to Lindsey. Among them: skydiving, driving a Dodge Viper, throwing out the first pitch at a Brewers game and visiting Las Vegas, where he drove Richard Petty’s race car. In a few days, the family will leave for a trip to the Virgin Islands.

Lindsey and her friend, Skyler Zunker, 18, were among the people golfing Thursday. Zunker said he learned about the outing and called Lindsey to say he wanted to participate. He said he knows how hard such a situation is because his father, now deceased, had esophageal cancer.

Even Eric McLean turned out to golf for a while. He said overall he still feels well, but he mentioned some fatigue and aching in his joints and muscles.

He said he thinks it’s “pretty awesome” that three people he “never met before in my entire life” would raise money for him.

The effort “is really going to make a difference in my life,” he said — both the financial support and just knowing people are going to great lengths to help McLean. 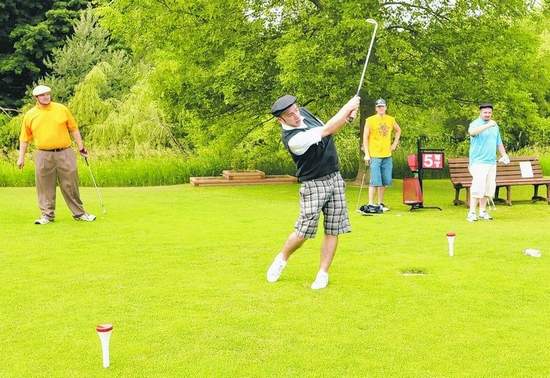