Four hospitals in one day…?!?

My younger brother Steve’s fiance began having lower back pain later on last week. Then all of a sudden she started having contractions! Keep in mind the baby wasn’t supposed to be due for another 6 weeks or so…so this was quite the scare, because she could be beginning labor. On Friday the 9th she was admitted to our local hospital in Two Rivers to try to control the contractions and keep her from dilating any further. She stayed there overnight and into the next day or two. At some point her water broke and they rushed her up to St. Vincent’s hospital in Green Bay where they specialize in premature pregnancies…she was beginning to go into labor. From what I understand, her doctors were some of the best in the area and she, and baby Ava, were in very good hands.

Also last week, my father, who has had a condition known as hiatal hernia, decided that is was a good time to get surgery on it. Just to quickly summarize what it is, hiatal hernia is where a portion of the stomach is actually above the diaphragm and in the chest cavity. This is something he has been dealing with for a very long time and is extremely painful when he eats. After doing various x-rays and so forth they found that over half of his stomach was above the diaphragm and he had a tear in his diaphragm something like 6 inches long. Being that I have a good month before I have to go back to the hospital for treatment, now was the time to do the surgery. On Monday the 11th he went in for surgery. They put his stomach where it was supposed to be and stitched the tear in the diaphragm. At the same time, they also put a slight twist to the stomach to help anchor it in place. Being a 1-2 day hospital surgery, he fully expected to go home the next day. Sadly, this was far from the truth. Turns out, the hole from the esophagus through the diaphragm and into the stomach was so tight and swelled up there not even a drop of water would go through. It wasn’t until yesterday that they were finally able to squeeze a feeding tube through the diaphragm to give him some nutrition. Now, it seems as though they may have done a little too much during the surgery and they want to go back in this coming Monday and untwist the stomach a little bit to hopefully open the passage some more. Until he is able to eat fairly normally, he will have to remain at St. Luke’s hospital in Milwaukee. He is in incredible pain and I feel absolutely horrible that he is down there dealing with this.

Let’s see here…what’s next? Oh yeah, Mike, my older brother was at the UW-Madison hospital with a severe kidney stone! This week has been absolutely crazy…and it gets crazier! This next little blip is huge! Mike will be competing once again in Ironman Wisconsin held in Madison, WI to complete the fund raising circle! Throughout the next 7 months, he will be training very intensely for this. He will still also be competing at the UW-Whitewater triathlon on April 27th. I am truly grateful for all of the work Mike has done to bring awareness to leukemia and all of the other cancers that plague each and every one of us in some way shape or form. He will forever be my hero….thank you Mike.

On Wednesday the 13th, my future sister-in-law, Ashley, gave birth to a baby girl. Her name is Ava Rae. Being that she was 5-6 weeks premature everybody expected her to have to be incubated and thoroughly helped by the doctors who were seeing her. It’s typical for babies that premature to have underdeveloped organs…more specifically the lungs. Thank God, however, this was not the case with baby Ava. She came out of Ashley at 5 pounts 8 ounces! Almost immediately, my mother sent me a picture of her via cell phone and she is absolutely beautiful. Today, they sent Ashley, Steve, and baby Ava home. One of the things that has been going through my head before all of this happened was the fact that I probably wasn’t going to be able to see baby Ava for a long time. She was due in late March, and I was to be admitted back to Froedtert in mid-March. I was so incredibly excited to go over to their place and see her, and I did just that.

Okay…what’s next? Oh yeah…I have leukemia! Well…in remission at the moment but you know what I mean. This week I went to an appointment on Tuesday where I just got some routine blood tests along with a doctor visit. It wasn’t very exciting. I suppose it not being “exciting” is a good thing. That means that everything is okay! So I spent the next few days slumping around the house, still having quite a bit of fatigue. On Thursday as I was taking a shower, I could tell that something was wrong. I told myself in my head, “Yeah I think I have about 10 seconds to find somewhere or I am going to crack my head on the tub!” I turned off the water, threw open the shower curtain, grabbed a towel, and threw myself on my bed right across the hallway. Blacking out is so unpredictable. It comes and goes, and it usually means that my counts are low. Well being that my bone marrow is still not functioning, I’m not producing any white or red blood cells. Low red blood cells means not much oxygen getting to my brain….thus I passed out – luckily on my bed. So the next day, Friday, I had another appointment in Milwaukee. I drove down with my mother and sister. They dropped me off, because all I was going to be doing was getting my blood labs done and some platelets. They headed over to St. Lukes hospital to visit my father and give him some amenities. Last Tuesday at my appointment they said I needed platelets so that’s why I was getting them. Before I walked in the hospital, I knew I was going to need red blood cells as well. With being lightheaded every now and then, I figured I was going to have to spend the rest of the afternoon getting blood as well. Sure enough, when my lab results came back they told me that I would have to stay an extra 3 hours or so to get two units of blood. One of the main things I was looking forward to on Friday, was getting to go see my father who has been at St. Lukes hospital maybe 20 minutes away from Froedtert. Right when I was finished with the blood transfusions, I headed right back over to St. Lukes. My mom and sister picked me up. We visited for two hours or so and then had to hit the road, because it was getting late.

Also, NBC has recently contacted me and they want to do a news story on me. They are going to interview me and Mike this coming Monday. I’m not exactly sure when they are going to air it on television, but I will definitely keep you updated as to when it is. On March 3rd, they are going to have both me and Mike in studio for a LIVE interview at 5:00pm. It’s incredible! I am so excited to be able to give the opportunity to convey my thoughts and feelings about L.I.F.E. and cancer awareness to tens of thousands of more people! I am pretty sure I will be able to get the video files and upload them onto the site in case you aren’t able to watch it.

Thank you all so very very much. I must have said this a hundred times already, but the continuous stream of support that my family and I am getting is incredible. 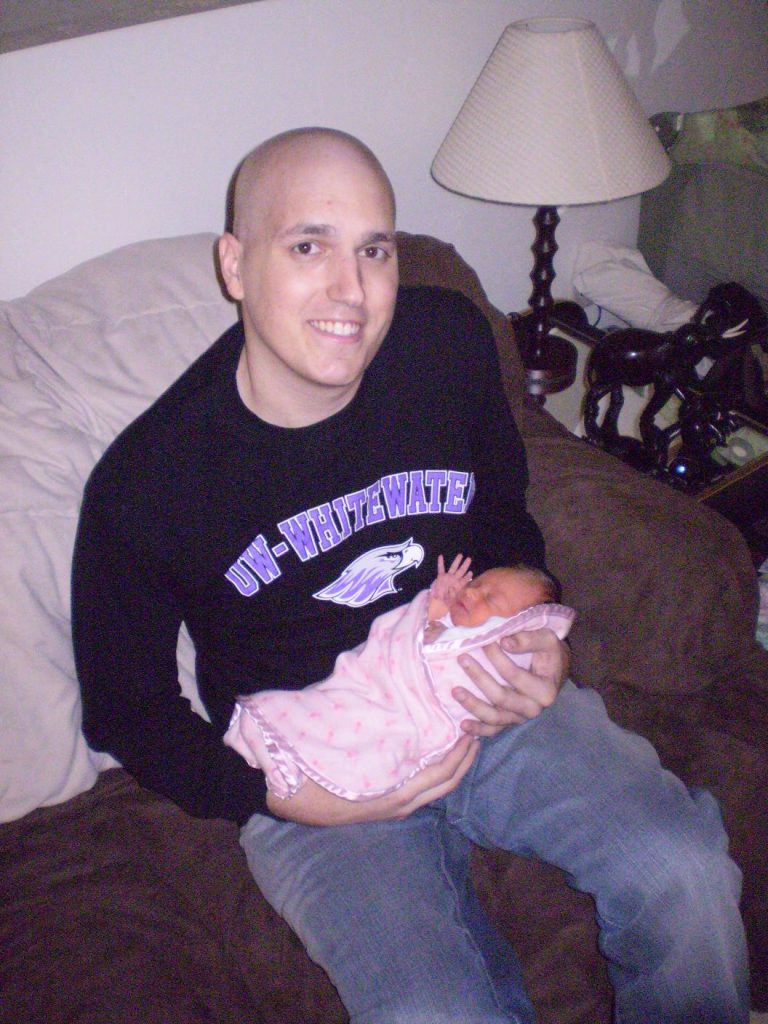