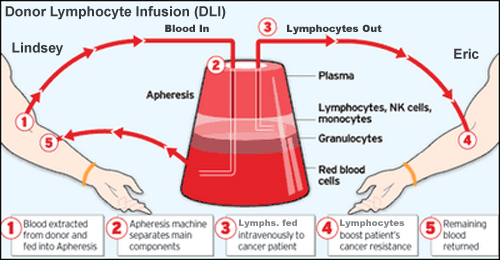 November 7, 2009 – Eric’s sister Lindsey went into the hospital 2 days ago to have a full panel of tests done on her blood in preparation for the Donor Lymphocyte Infusion (DLI) procedure scheduled for next week Thursday, November 12th.   White blood cells are also known as leukocytes, and lymphocytes are one particular type of leukocyte.  The DLI will be used in an attempt to stimulate a donor versus leukemic reaction and thus eradicate any remaining leukemia cells.

The lymphoctes will be collected from Lindsey during an apheresis procedure and will then be infused into Eric.  It is an outpatient procedure so he will be able to go home right after.  Donor lymphocyte infusion differs from allogeneic bone marrow transplantation in that it is not preceded by chemotherapy and T cells are not depleted. Lymphocyte infusion with a defined T-cell dose can cause a profound graft-versus-leukemia (GVL) effect and is an effective form of salvage immunotherapy in allogeneic marrow transplanted recipients.  The advantage in using DLI versus second allogeneic transplantation is the lower treatment-related morbidity and mortality, though Eric has already had a second allogenic transplantation.

The GVL effect is a well-described phenomenon, which is associated with the presence of graft-versus-host disease (GVHD).  However, the presence of GVL is not dependent on the presence of GVHD.  For example, the rate of leukemic relapse is higher in patients receiving T- cell depleted allogeneic marrow, even after controlling for the degree of GVHD.  This observation suggests that there may be a distinct subset of T cells responsible for GVL.  Donor lymphocyte infusion attempts to harness the anti-leukemic properties of donor T cells.

Unfortunately, graft-versus-host disease (GvHD) often accompanies graft-versus-leukemia effect. In GvHD, the donated bone marrow or stem cells view the recipient’s body as foreign, and the donated cells/bone marrow attack the body.  GvHD can affect the skin, liver, and intestinal tract. GvHD is occasionally life-threatening and often requires admission to the hospital for treatment.  GvHD treatment is usually steroids that suppress the immune system and sometimes can lead to infections. GvHD, and its treatment, can be fatal.  Another potential side effect of donor leukocyte infusions is bone marrow suppression, which results in a decreased white blood cell count. In most cases, the problem is short-term and resolves itself without treatment. In some cases, the problem is resolved with the help of growth factors or a “booster” injection of donor cells. If the condition does not resolve, blood or platelet transfusions may be necessary.

Thank you again for keeping Eric in your thoughts and prayers, we’ll continue to keep you posted as we learn more!