Cancer survivors walk for a cause

In the Press
13 years ago
Previous Post
Eric at the 2010 Relay for Life in Two Rivers, WI
Next Post
Help L.I.F.E. raise 1 penny for every 100 cancer patients before September 12th!

TWO RIVERS — First came the tears, then a big smile on the face of Eric McLean on Friday evening at the 16th American Cancer Relay for Life of Manitowoc County.

“I stand here today to tell you I have survived cancer three times, and I am a walking miracle,” McLean, 27, told hundreds of cancer survivors, their caregivers, family members and friends during the opening “Celebration” ceremony at Two Rivers High School.

In a halting voice, he recounted his battle against acute myelogenous leukemia, including stem-cell transplants from his older brother, Michael, and younger sister, Lindsey, numerous rounds of chemotherapy and several setbacks that put him at death’s door.

But, the Two Rivers’ Washington High School Class of 2002 graduate now is looking forward to continuing his website job at Harley-Davidson, and he became engaged to Kari Jaeger of Manitowoc two weeks ago.

“It’s because of people like you that I’m standing here today,” McLean told the audience, most of them members of 75 teams raising money toward a goal of $300,000 for treatment, research and education.

The theme of Relay for Life is “Celebrate … Remember … Fight Back.” Survivors, or “heroes of hope,” were wearing their distinctive purple T-shirts as they took the first lap around the track.

With a big smile, McLean was out front holding the Relay for Life banner, flanked by fellow survivors Gary Zipperer and Sharon Wondrash.

“I walk for those who can’t,” said Barb Jadowski, who this summer formed her own “Just Keep Stepping Together” team.

With eight pairs of shoes and six pairs of socks, Jadowski vowed to break her personal walking record from the 2009 event when she took 83,028 steps going round and round the track for 15 hours.

One of the sights for walkers Friday evening was a “Memory Garden,” created by Julie Denfield with the help of three area businesses — Scenic Landscapers, Living Colors and Steine’s Water Gardens.

A stone bench in the temporary garden was inscribed, “Those we love don’t go away — they walk beside us every day unseen, unheard, but always near, so love, so missed, so very dear.”

In addition to the money raised via pledges, other funds were raised Friday night through sales of baked goods and candy, glow bracelets, haircuts, a silent auction, and the opportunity to swing a sledgehammer and pound a car.

For a suggested donation of $10, luminaria — lighted candles in white paper bags that encircled the track — were available “in honor” or “in memory” of cancer fighters.

While the wind was blustery at times, no rain fell during the early hours of the relay.

At 1 a.m., a “Rock the Night Away” dance session was on the itinerary and was to be followed by a game of musical chairs at 3 a.m. in the middle of the Raiders football field.

A closing ceremony is set for 10 this morning. 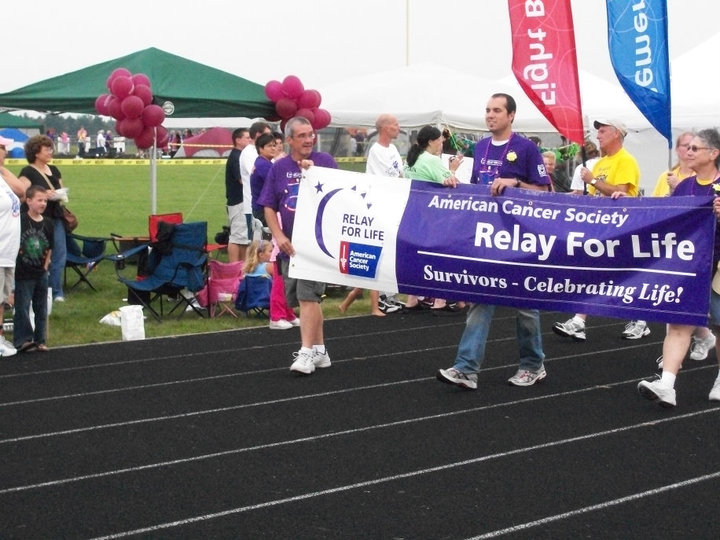