Bucket List Guy: A story of love and survival

PORT WASHINGTON – On this Valentine’s Day–a story about love against all odds. We revisit Eric McLean — a Port Washington man we fondly refer to as ‘The Bucket List Guy’, Eric is now also a newlywed!

Eric and his wife Cari look like any newlywed couple, but their story is anything but ordinary.

We first met Eric in 2009, when he was given only months to live, and created a bucket list. He even went sky-diving!

Today, Eric’s adventures are much more domestic. “Cookin dinner, and takin out the trash,” he laughs.

Eric and Cari started dating 3 years ago, but have known each other since they were teens. Cari admits, “Opposites attract!”

Eric adds, “We have nothing in common.”

Then… another roadblock for Eric.

“He relapsed a third time, and he actually told me I could walk away and he would be fine with it. I didn’t want to,” Cari says.

They got married last July. Eric then relapsed again, on their honeymoon, and went into treatment as soon as they got home.

The good news–Eric is now in remission! He is ready for whatever comes next–thanks to the love of his wife.

Eric adds, “There are almost no words to describe the feelings I have for her, it’s really tough.” 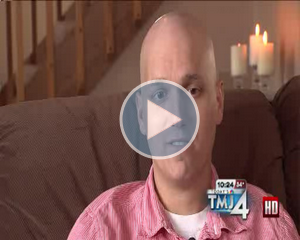