Anna, Zach, Mark, Becky, and Theresa all finished in the Ironman WI 2011!

September 11, 2011 – All 5 people who set out to race in this year’s Ironman Wisconsin while wearing a piece of Team LIFE gear finished strongly!  Thank you everyone for all of your support and congratulations, you are an IRONMAN!!

Theresa Hagen, a nurse from Onalaksa, WI being coached by Blake Becker finished her second Ironman in 14:39:45.  Mark Mehler, a friend of Mike’s, finished in 12:08:37.  Mark’s wife Becky Reinhart crossed the line in 12:57:17.  Zach Geelan, a 22 year old US Marine at UW Madison, wore his LIFE singlet and finished in 12:51:18.  Anna Siliciano, a close friend and 28 year old physical therapist won her age group to qualify her for the World Championships in Kona, Hawaii in 11:01:13!

The race was also unique because there was a racing team there named Team 9-11 which was created by Captain Carl Gloede of the Madison Police Department Honor Guard and Steve Gatto of Chicago.  It was made up of 150 police, fire, and military personel from across the country that participated in the race.  They have raised over $20k for their charities.  Gatto, a 9/11 survivor, was on the 44th floor of the South Tower when the airplane struck and passed many firemen on his way out of the building as they were making their way into it to help save lives. He raced to pay tribute to those who lost their lives that day and so far he has raised $6000 for the Wounded Warriors Project. 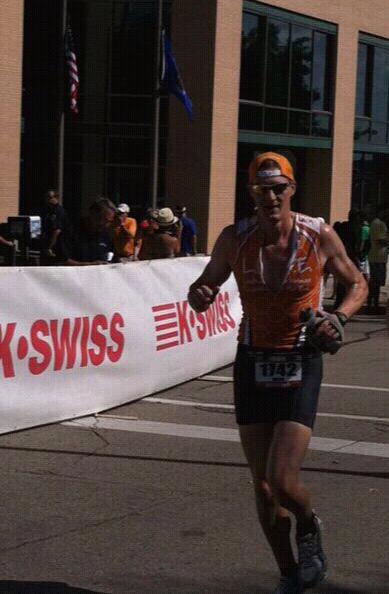