Happy Thanksgiving 2009! A Lot To Be Thankful For

Happy Thanksgiving Everybody!  Today’s TMJ4 NBC News in Milwaukee aired an interview last night between Eric, his doctor, and good friend and Milwaukee Brewers Legend Larry Hisle.  To watch the video, click on the above picture and then click on the “Video” link.  Thank you to everyone for you support, and a special thank you to Jay Olstad at NBC news.  🙂 -The McLean Family

MILWAUKEE – Since he was young, Eric McLean has been a fighter.

“Eric has always strived to do the best,” said Mary McLean, Eric’s mother.

And now her 25-year old son is in the fight of his life, quite literally.

Six years ago, Eric was diagnosed with Leukemia.

“I was just about to turn 19 and then the bomb dropped,” he said.

He survived, went into remission, and then four years later another bomb dropped.

“Wow, that’s really hitting you in the gut,” said Mary.

His mom remembers the day her son was diagnosed with Leukemia for the second time. So does his doctor.

“Quite to our surprise he relapsed four years later which is a little late,” said Dr. Christopher Bredeson of Froedtert and Medical College.

But then, a third punch in the gut. The Leukemia Eric beat not once but twice, came back.

His doctors gave him only two months to live.

“There’s so much more I want to do before I pass on and that’s where the whole bucket list came from,” said Eric.

That’s where we first heard of Eric’s story. He was compiling a bucket list. For a lack of a better phrase, it’s a list of all the things you want to do before you kick the bucket.

Among other things, he went skydiving and in June threw out the first pitch at Miller Park.

By now, though you’re probably doing the math in your head and asking, ‘if he was given two months to live in June, why is he talking to you in November.

So we tagged along with Eric during a doctor’s appointment at Froedtert to find out.

After taking a cocktail of drugs the last few months, something quite unusual has occurred.

“We didn’t see evidence of the Leukemia,” said Dr. Bredeson.

“It’s been a wild ride. They’re using drugs on me they’ve never used on patients before,” said Eric.

“And I must admit to my surprise, it seems to have gotten his disease back under control,” said Bredeson.

Bredeson and his staff of doctors are now in uncharted territory, essentially making up the treatments as they go along. And it seems, at least for now, to be working.

“We’re talking any where from zero to five percent that I would even be able to have this conversation with you. It’s the greatest day of my life,” he said.

“But the story doesn’t end there. Eric started a website, www.givetolife.org. On the site, he’s raised tens of thousands of dollars for cancer research.

And it’s gotten the attention of one of Eric’s heroes.

“Everyone on this planet needs a friend like Eric,” said Larry Hisle.

The Brewers introduced the two when they found out Eric was going through his current battle.

“From the first day I said hello to him I knew this man was special and if he didn’t mind I would like to spend as much time with him as humanly possible,” said Hisle.

Hisle now goes to every doctor’s visit with Eric.

It’s support not just from the former major leaguer, but from family and friends and even his doctors, that Eric credits his current success.

And while his mother agrees, she knows it’s much more than just that.

She’s learned her son has chosen to look death in the face and smile and fight back, teaching us that a day, no matter how crummy it maybe is just that.

It’s a day to be thankful.

“Live every day like it’s your last, quite literally,” he said. 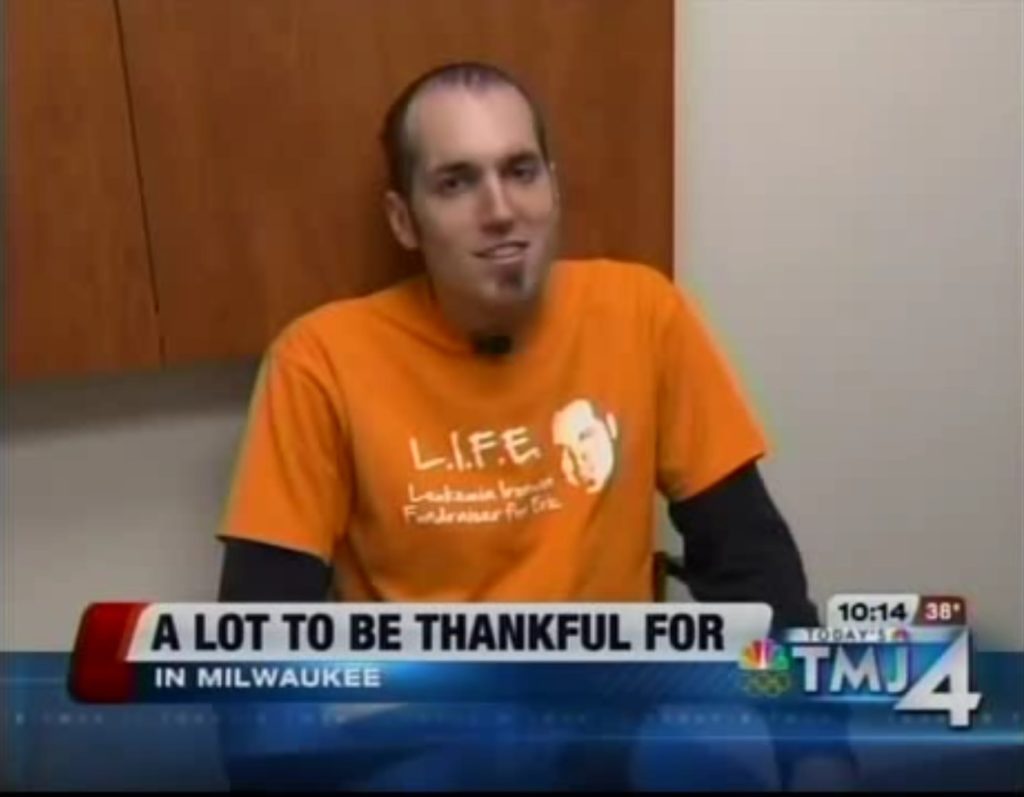