Anyway…thought I would use today’s journal to show you what exactly Total Body Irradiation is and looks like.

Step 1:(enter Mary McLean/Mom) Eric is not up to continuing this blog so I will help out. While Lindsey was donating her cells for the transplant, I joined Eric as he traveled down to Radiation Oncology. I asked if I could see where he gets his radiation; they invited me to come in and watch while they got him ready. Of course I brought the camera, just in case. 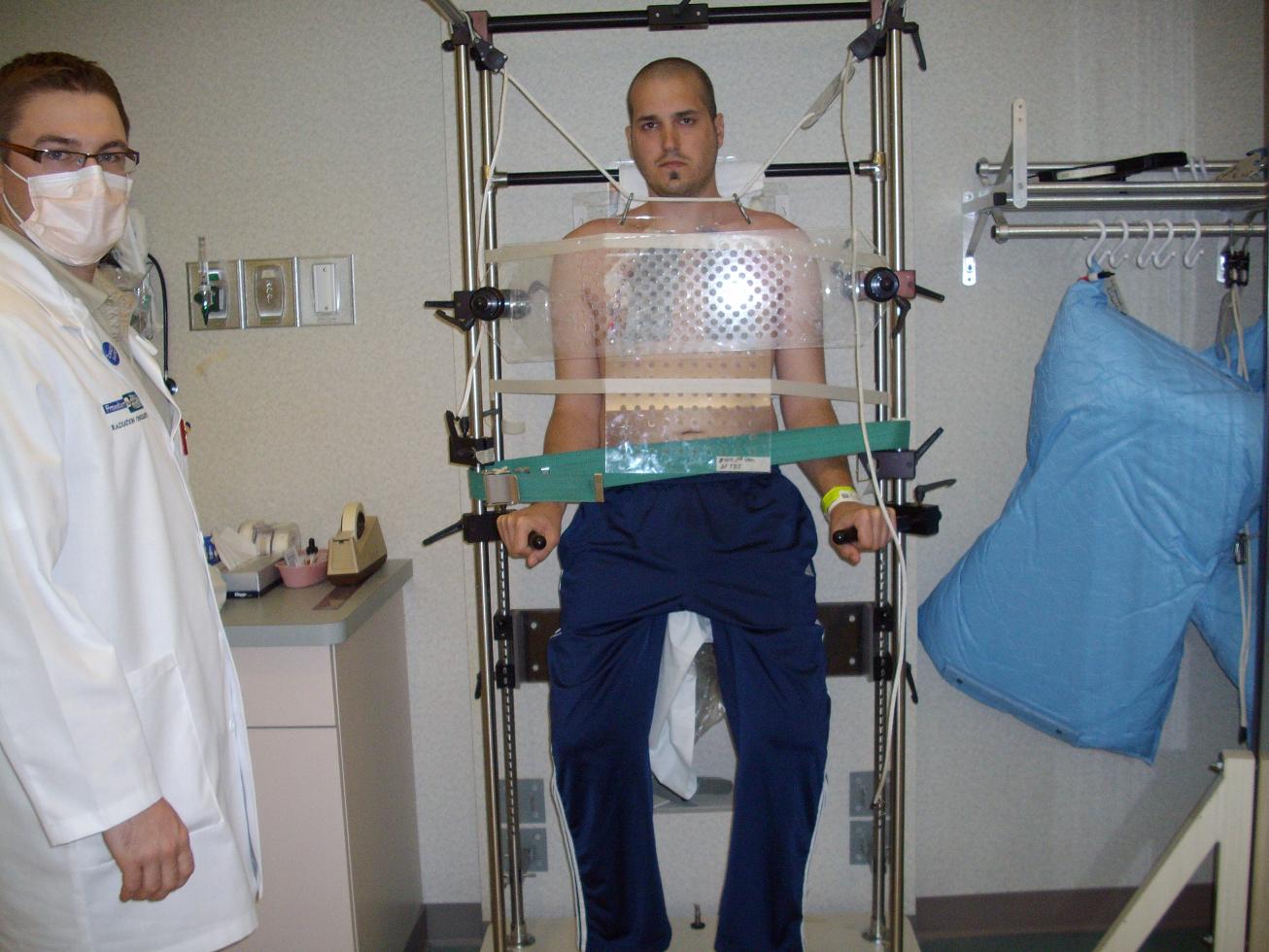 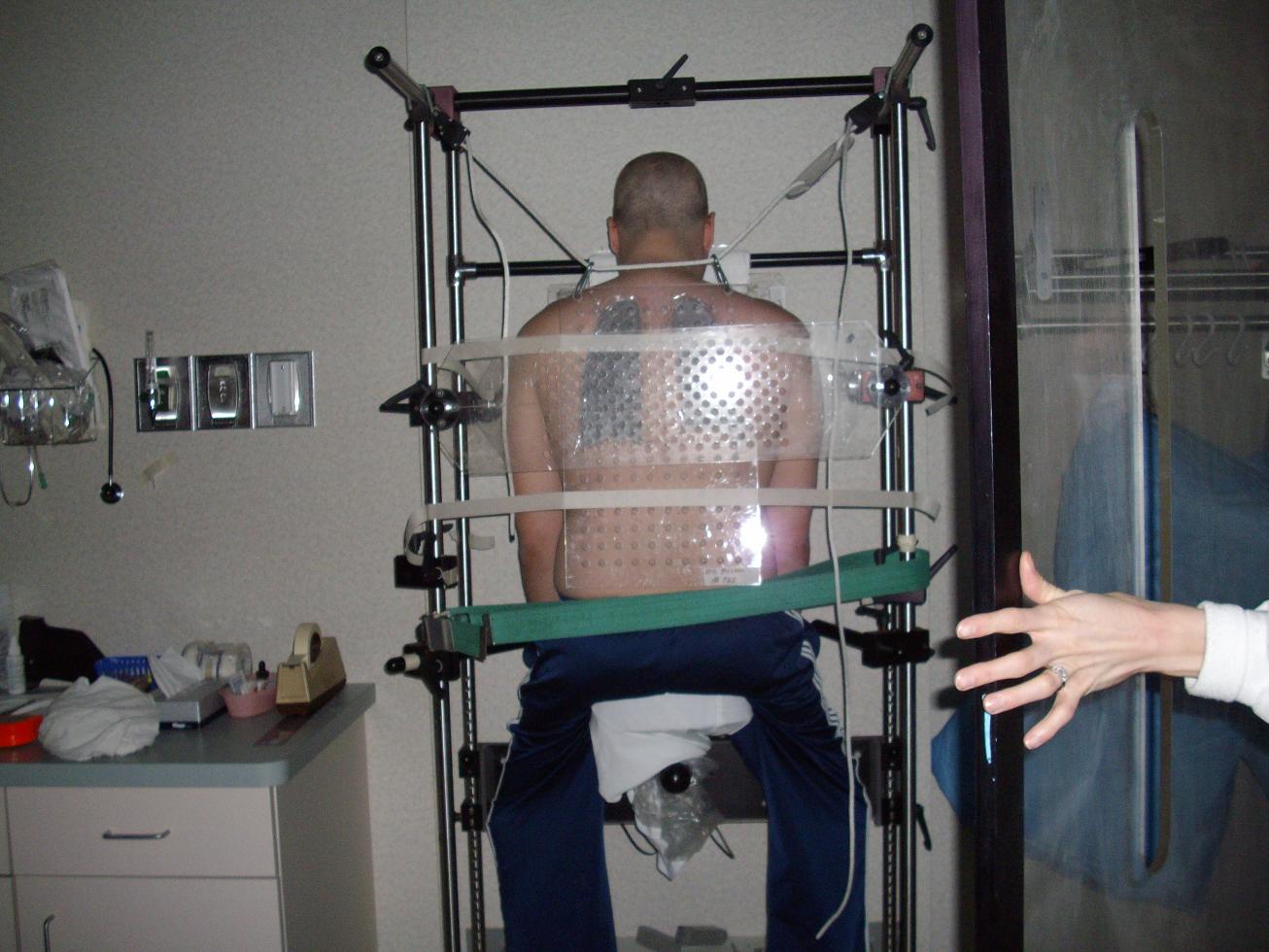 They customized shields to partially protect Eric’s lungs from the intense radiation as they are the most likely to be damaged; both his front and back have shields for protection made from lead that allow 40% to get through. He was strapped in and unable to move after the plates were lined up and taped in place. Music was playing so he had something to listen to while sitting in this most uncomfortable position. Outside the radiation room was an area with television screens and monitoring equipment. Communicating with Eric was possible through a microphone. It looked to me like a torture chamber and it was very difficult watching him endure this painless, yet immune destroying procedure. Afterward, Eric felt quite weak and nauseous. He still has the hiccups and a terrible headache, but continues to say “thank you” to everyone he comes in contact with. After approximately 6 minutes, on each side, Eric’s was wheeled back to BMT Room 2. Lindsey was across the hall undergoing the most important phase of this day. (Back up a couple days)

Lindsey had been given shots of a drug called Neupogen to encourage white blood cell growth; we began giving her a series of 3 shots a day since Sunday. On Monday she was experiencing great pain in her back and head. Her body was cooperating and doing what we needed it to do. I brought her to Froedtert on Tuesday and they made her more comfortable by giving her an iv and some pain medicine. I brought her back to the hospital at 7:30 A.M. Thursday. She was taken into a sterile room where they put in a central line for the extraction of her stem cells to eventually be given to Eric. A central line is a tube inserted into the side of her neck, in through her Jugular vein and to her heart. Around 10:00 in the morning Lindsey was hooked up to Bob. That is the name the blood center crew gave her specific machine, another is Joyce…as busy as these wonderful people are I suppose a little humor helps make a long day more interesting. Lindsey could not leave this chair until after 5:00 yesterday evening. It was a long time, but so worth it. They hoped to harvest at least 5 million cells; the call came last night that 9.5 million were collected. If she hadn’t produced enough the process would have had to be repeated today. Her line came out around 1:00 today much to her relief! 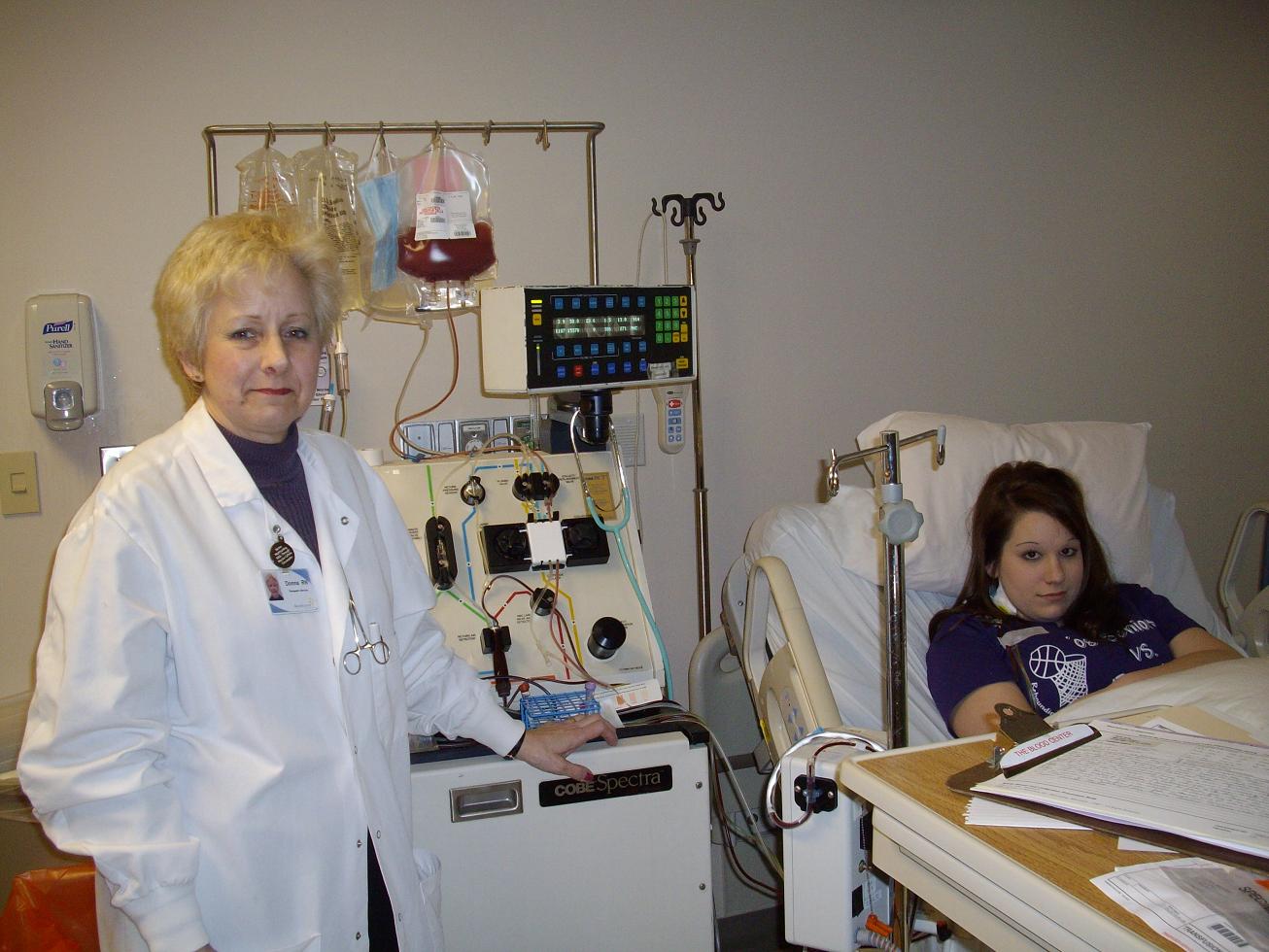 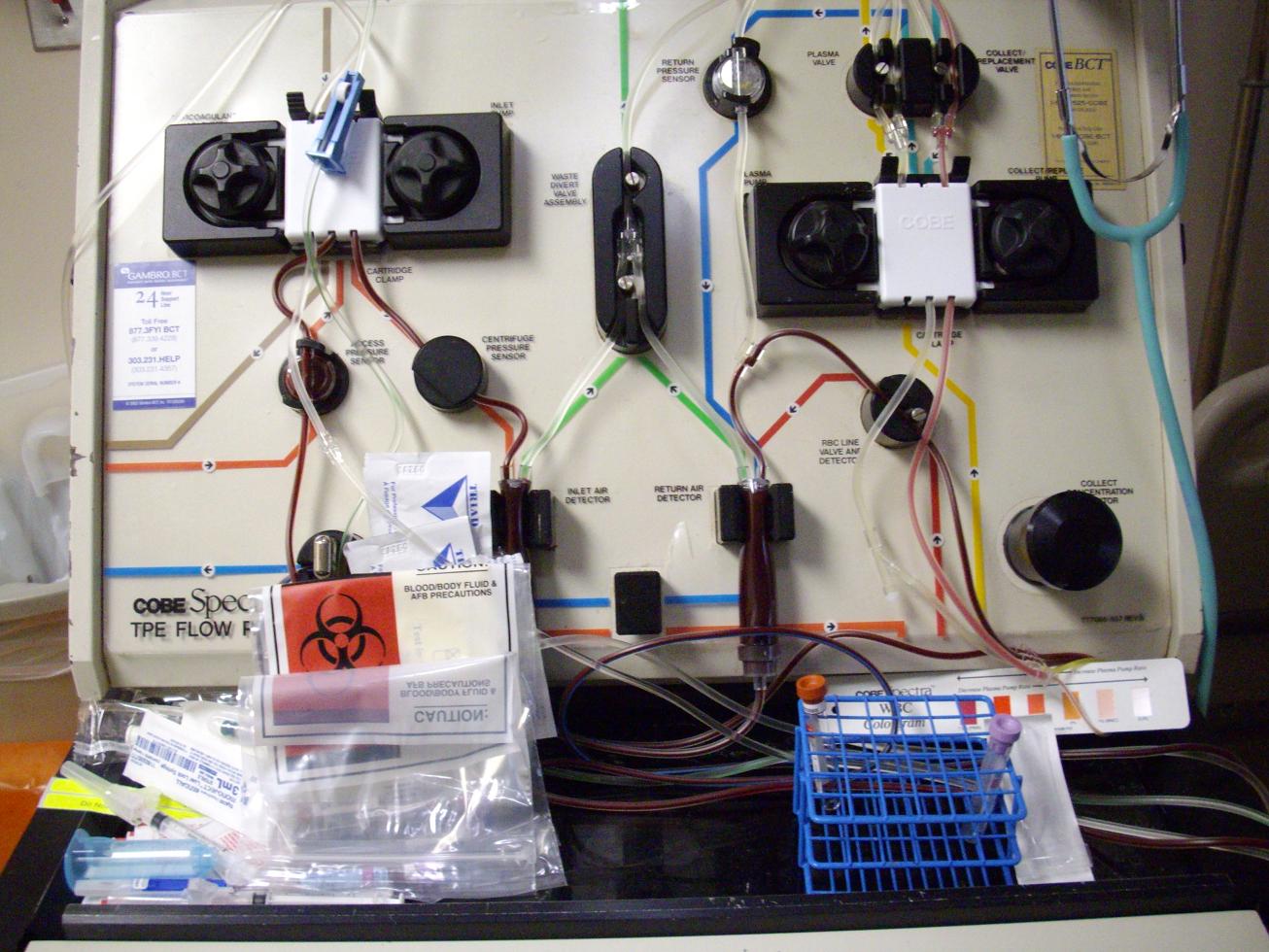 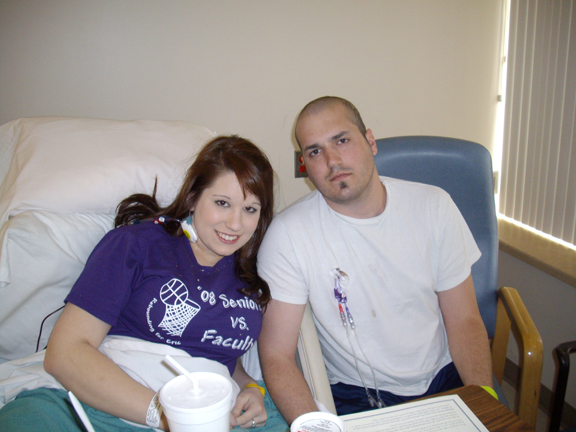 Brian took the day off today to be here for the transplant. I paused the typing of this blog while Brian, Lindsey and I joined Eric for his final radiation treatment. I knew they would be able to see what I saw yesterday. While watching the television screens during his treatment, Eric somehow managed to move his arm enough to treat us to a “moon.” At least he hasn’t lost his sense of humor!

So, chemotherapy on Monday and Tuesday & Total Body Irradiation on Wednesday, Thursday and Friday are complete and we wait for Lindsey’s cells to arrive for the transplant.

Thank you all for the incredible support we have received from all over the world. Emotional support and the many prayers offered up for Eric have made all the difference to our family. We have been through a lot and thank God we have so much love surrounding us and helping us through.

Count your blessings as they are more abundant than most of us realize. 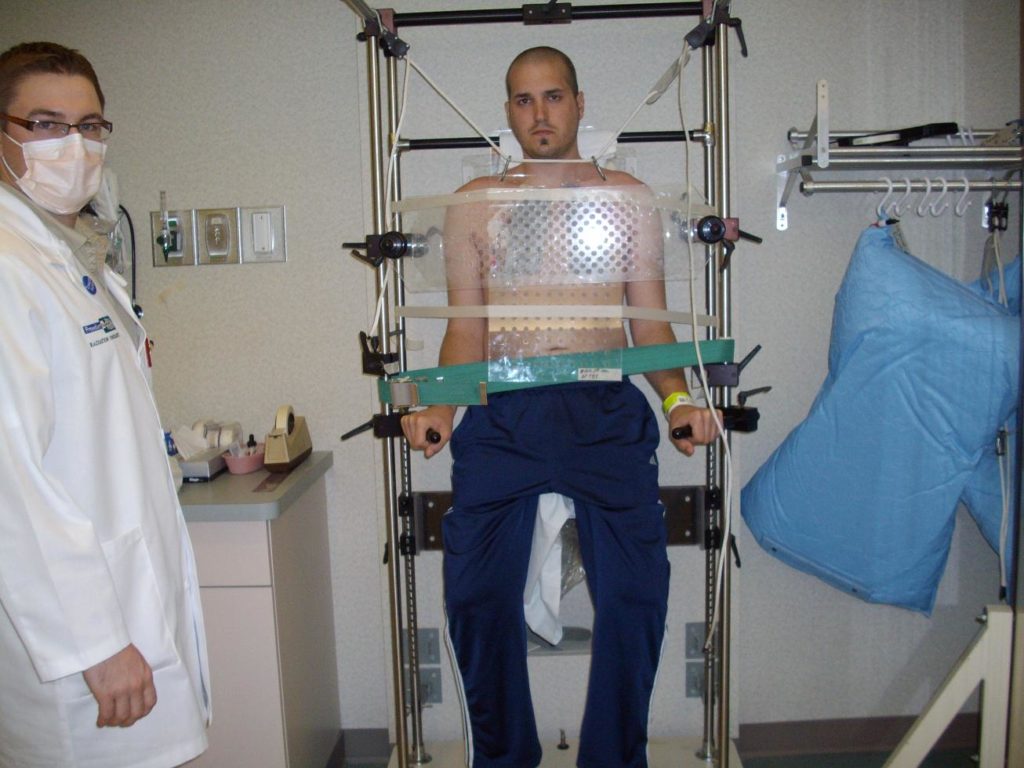